After stopping by my LGS a few days ago for what was likely my last visit, I am forced to admit that I have not given the 40k scene there the proper consideration or respect that it deserves. I now believe that my soon to be former LGS can in fact boast of having the toughest competition of any game store in the world. Need proof? Check out this sign-up sheet I spotted for an upcoming 1850 point tournament they will soon be hosting: 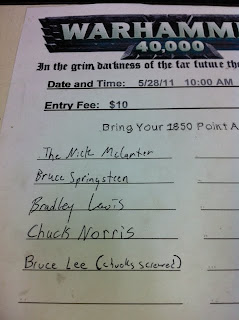 That's right, both Chuck Norris AND Bruce Lee have signed up to compete! Who would have ever guessed that my humble LGS would host the most epic confrontation in the history of table top gaming, if not that of all humankind? And you just know those guys are total WAACs, too. ;) I'm not sure about his skill as a 40k player but I'd say Springsteen is a lock for third place and the Players' Choice award. I mean really, who's going to give The Boss a bad sportsmanship score? (Uh, besides Julianne Philips, that is.)
Considering the dramatic rise in competition at my LGS, I am a little sad that I won't be able to play in this tournament, nor even be in attendance to witness what will surely be a battle for the ages. The reason for this is that I am officially moving to Asheville, North Carolina a mere two weeks from today... hooray! No more speculation or hopeful optimism, this time around everything has been confirmed and it's truly a done deal. We will be moving into our new place on June 2nd so unfortunately I expect that I will be too busy even for the colossal Norris v. Lee showdown scheduled for next weekend.
Preparing for my family's move to NC has been the main cause of my recent decline in blogging, as well as my overall lack of hobby time over the past two weeks. Since my previous post I've picked up my paintbrush just one other time before doing so again earlier tonight to work a little more on Captain Homer. I'd like to finish him and a few other small projects before I have to finally pack away the last of my hobby gear, though I am not terribly concerned should I end up having only a minimum of painting time for the rest of the month.
Nonetheless I will try to post at least a few more times before then. Tonight I just wanted to provide a little update on what I've been doing and to offer an explanation for my absence from the blog. I've been really busy but I am so excited about moving that it has been very much worth all the associated hassles. I hope all of you are doing quite well too, goodbye for now!
Posted by Papa JJ at 11:53 PM