Hobby time has been sparse the last couple of weeks and I feel as though I've been in sort of a painting funk as well. There have been some exciting developments for my family concerning our desire to move to North Carolina which I will explain once things have been finalized, but in the meantime that is what has been taking up most of my spare focus and energy. I have therefore just been working on a few small projects whenever I've found both the opportunity and motivation to do so. There are quite a few half painted minis on my desk I can choose for such tinkering, none of which have been sitting there for as long as Captain Homer. I therefore decided a few nights ago it was time I went back to work on him. 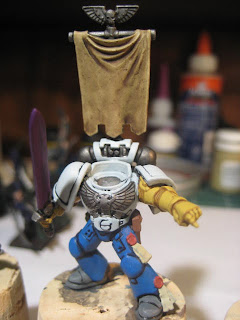 Well what can I say? I hate painting white. It drives me crazy and is the reason I waited so long before returning to this miniature. Yet there's no way for me to realize my vision of Captain Homer without him wearing the blue and white power armour. As expected it's been problematic and I am not entirely satisfied with the results so far. I am happy nonetheless to finally be making some progress on this guy even if it has been at times frustrating. This should be however only the first of my Captain Homers as I plan on making several other alternate models of him for use with my Stonecutters army. Also, having been inspired by the story from Treehoue of Horrors XIII, "Send in the Clones," I would eventually like to make a squad of Homer clones with the same color scheme for use as the army's Death Company. I therefore should have numerous additional chances to practice working with white paint and hopefully I'll soon find a technique that feels more comfortable to me. 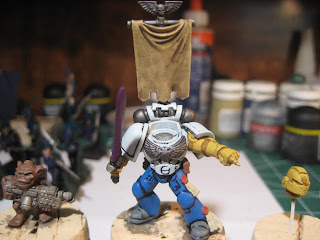 That happy little fellow pictured to the left of Captain Homer is his buddy, Mojo the Helper Monkey. Simpsons fans will remember Mojo from episode #5F15 of Season 9, titled "Girly Edition," in which Homer acquires a service monkey to do the various chores and duties that he is too lazy to do himself. Once I saw this miniature from the CoolMiniOrNot Limited Edition Series of a monkey armed with a flamer thrower, I knew he would make a perfect Mojo and had to find his way into the Stonecutters project. The approach for 40k that I've chosen for this is to treat Mojo simply as a marker denoting Captain Homer's weaponry, thus abiding by the standards of WYSIWYG but otherwise having no in-game effects. This particular Captain Homer will count as being armed with a power weapon and a hand flamer, making him a fairly cheap HQ option relative to most of the others that I expect to have with this army.
I am excited about the prospect of having this miniature painted and complete. It marks the long awaited beginning of the actual assembly and painting stages for my Stonecutters army, having been previously stalled in the conceptual and planning phases for far too long. If my schedule cooperates I think I should be able to finish Captain Homer and Mojo in the next few days, although I still have not made up my mind what I'll be doing for their bases which might have to wait a while longer. I'll try to get another WIP update posted soon once I've made some more progress. So until next time... happy gaming and painting, everyone!
Posted by Papa JJ at 11:55 PM