Mercury has gone retrograde again and already seems to be causing all sorts of havoc and chaos... obviously this planet has some strong connections to the Ruinous Powers! Yesterday was almost entirely lost to the ravages of this rogue planet as my family scrambled to deal with the ensuing tumult. Everything is basically okay now, although it does appear that Mercury has some lifestyle changes in mind for me. I don't want to go into any details and I apologize for holding back, but it just doesn't seem appropriate. However, concerning the actual reason for this blog, my hobby interests, it is possible that these changes could improve my painting abilities. If nothing else, this should mean more quality time to paint my plastic and metal, so in fact it may be that Retrograded Mercury has done me a big favor. If this is the worst that happens to me while Mercury completes this portion of its orbit, then I will be grateful just to not get a new hematoma cause that has sucked hard... so here's hoping 2010 is fall-free! 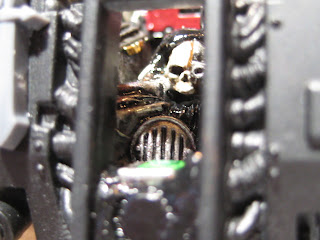 Meanwhile I have kept steadily working at my Dreadnought and was able to finish the interior a couple of days ago. I ended up being really impressed with the way things worked out, especially considering I basically just jammed a bunch of Greenstuff and chopped up bits into the space and hoped for the best. Despite only using the rounded end of a paintbrush as a sculpting tool, it nonetheless actually looks like there are intentionally modeled details like clusters of pipes and hosing. My favorite element though is probably the little tech-screen that I added late in the process to the top of magnetized blob of Greenstuff. Taken from the interior wall-panel of a Rhino, in its new place in the Dreadnought it looks to me like someone thought to install a GameBoy for the entombed Marine's enjoyment between battles. 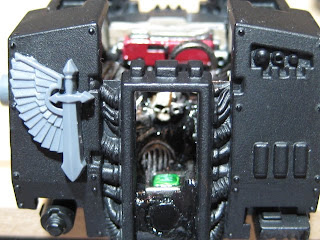 The other feature I really like will be considerably less obvious once the Dreadnought's torso section is glued together. I cut off the same panel from the Rhino kit (actually I believe it was my Chaos Vindicator that had to sacrifice this bit) the stowed bolter and used it to fit over the exposed inner face of the Dreadnought's power plant. My idea with this was that, prior to being sealed within the sarcophagus, the new occupant's trusted Boltgun was placed in with him as a gesture of respect and honor. I think this reinforces the idea that a Space Marine's personal weapon is an item of reverence and an extension of his identity, as well as being a symbol of his devotion to the Emperor. I thought it would be cool for the Dreadnought pilot's bolter to stay with him in his new metal body even though he could no longer physically use it. Also I think it conveys some of that quasi-religious superstition about technology that so marks the background for Warhammer 40,000. 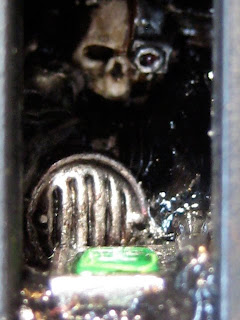 Painting the interior was a fun challenge and allowed for me to really experiment with some unusual effects. After working up the metal areas from a base coat of Tin Bitz, I then really went to town with the washes. Other than the expected washes of brown and black, I mainly used a purple wash and a green wash to achieve a subtly unusual tone to the technological stuff, like all of it had been inside this hybrid biological/mechanical environment for a long time. I also hit some select areas with a blue wash on the pipes and a red wash on the vox-caster thing sunk into what would have been the pilot's chest or abdomen. Finally I went over everything with a heavy layer of 'Ard Coat to make it all look shinny and wet, as if the interior were bathed in the fluids and whatnot needed to sustain the functioning of these ancient systems. Also from a practical standpoint I think the gloss varnish helps reflect light within the space to make things more visible once everything is glued together, which is nice considering the extra time and effort I'm putting into this guy.
Posted by Papa JJ at 2:11 PM