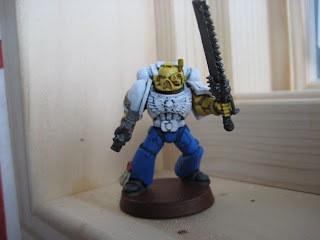 A few nights ago I had an hour to paint and so at last got back to the test Homer that I started a couple weeks ago. Overall there's not a lot different from the last time I posted pictures of this guy except that I worked more on the yellow areas and made my first attempt at painting the Stonecutters' symbol. I've never been too successful with my previous forays into painting freehand details which is the main reason why I wanted to have at least one practice run with the chapter badge. Based on my results with proto-Homer, I think more practice is needed. 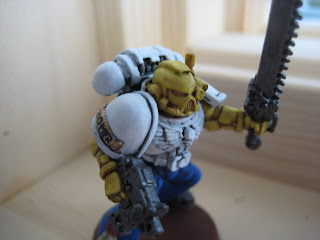 Before getting to the chapter badge, I first spent some time highlighting Homer's arms and helmet. It's been a long time since I painted any significant areas of a miniature yellow although I don't recall ever having any particular problem with the color. This time, however, I believe I let my paint get too watery as I had some issues controlling the pigment. Otherwise things were okay and I'm happy enough with how it looks, though in the future I do want to accent the highlights more. I'd also like to experiment a little with other lines of yellow paint to make sure I wouldn't prefer something other than the Foundry System paints.
The last thing I did with the yellow was to add a wash of Gryphonne Sepia in hopes of restoring some of the depth of color to the model. After highlighting the yellow those areas looked sort of faded and stale and I thought the wash might provide a richer color. It turned out alright but I wasn't too careful and left some splotches, most noticeably on his helmet above the right eye lens. I probably won't do that in the future, and if I do it will be much earlier in the process. So despite its fearsome reputation, painting yellow wasn't as bad as I thought it would be and I feel confident about being able to manage what I'll need to do for this army's color scheme.
As for the chapter badge.... well, take a look. 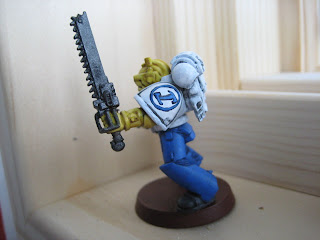 It kind of looks to me like the double-hammer design for which I was aiming, but that could easily be because I know what it is supposed to represent. I'm starting to wonder if I should have gotten on Chapterhouse Studio's wait list after all, but it really did sound like it could be a very long wait and I'm eager to get moving with this project. If I knew how to make custom decals I would be interested in going that way but that's beyond my abilities, both technical and artistic. That leaves me with painting them freehand. I therefore need to just be satisfied with doing them as best I can and hopefully get better along the way. No other way to improve, right? 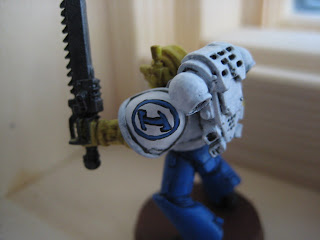 Going in for a closer look, you can see that what was meant to be a circle turned out like a slanted, wobbly egg-shaped thing. Not only do I need more practice, but in particular I need practice painting on curved surfaces like those found on these shoulder pads. I wasn't very patient and would have put more care in laying out things evenly were this not a test miniature, plus I made no effort to go back and tidy up my mistakes. I therefore feel like I've got some reason to be confident that I can do a better job when painting it for real. And the same goes for those white portions of the power armor, too, for which I just plan on taking a lot of time in order to get a smooth finish.
This Stonecutters project is very slowly creeping along but I'm okay with the pace for now. I decided recently that I want to hold off on anything more with them until after the home remodeling has been completed. It should only be a couple more weeks now and then I will be able to set up my own hobby space in the house, something which I have sorely missed for more than two years. Meanwhile I've got plenty of side projects I can work on when life allows me the time, like the stack of five Citadel Woods kits that I began assembling yesterday. I may not be painting much at the moment but I'm still trying to be productive.
Posted by Papa JJ at 11:39 PM