Okay, things are settling down again so I'd like to briefly update a few things tonight. The mother-in-law has departed once again for frozen New York, the monstrous Hydra is done for now, and in the past week all I managed to assemble for my Dark Elves was one little crossbowman. (Uh-oh!) How's that for an update? I suppose that's the most pertinent info anyways, the rest will just be details. 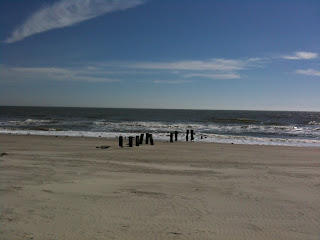 All that extra hobby time I thought was just around the corner for me turned out to be entirely imaginary... shocking, right? My daughter turned two years old yesterday so we've kept busy with friends and family stopping by in addition to having a very exciting and noisy birthday party on Sunday at the beach. We were staying one island over while my mother-in-law visited because preparations for the expected move to Asheville, NC have lead to a lot of upheaval at home and no space for guests. In vain I brought my Dark Elves to assemble but there were no good opportunities to work on them, although the stay at the beach was otherwise a great time. Getting to sleep in a bit as my mother-in-law took the early shift with my daughter was bliss. :) (Thanks again, Cheryl!)
As I said, the only progress I made on the Dark Elf front was putting together a single pitiful crossbowman. Oh and the Hydra is mostly done, still some minor greenstuff work to do on all those gaps but that's almost finished too. What this means however is that my timetable for this project is already thrown off track but worrying about it won't help, the only thing to do is press on. I'll focus my efforts on the miniatures I most expect to use for the 1000 point tournament at Adepticon, and if I can pick up the pace I might then look at some of the other models I've purchased. Hmmm, I think I should save details about this for a future post.
While I've made little tangible hobby progress recently, on the other hand I did find plenty of time last week to really dig into the first volume of the Malus Darkblade collection. I'm enjoying it a lot more than I thought I would even with its moments of face-peeling grotesqueries. (As an aside, I sometimes forget what a sicko Dan Abnett can be.) So despite his cruelty and all around horribleness, I've quickly grown rather fond of Malus and find him to be surprisingly funny and even kind of endearing in a weird way. I actually find myself thinking of him as almost a Warhammer version of one of my all time favorite characters, Ash from the Evil Dead/Army of Darkness movies, in that he is constantly being pummeled, beaten, stabbed, knocked out, captured, poisoned, suffocated, drugged, and otherwise generally abused at almost every turn. Yet to his credit he never stays down or out of the fight for very long and always seems to come out ahead in the end. As a hero, or antihero as you please, his greatest virtue so far appears to be his ability to take a beating. Also as I had hoped it would, the reading is helping me tremendously in my understanding of the Druchii as a people and their culture which previously had felt somewhat bland and one dimensional. Good stuff!
Another positive, albeit still somewhat disappointing, development from last week is the new plan my wife and I devised concerning the aforementioned move to Asheville. Musings of a Smurf kindly enquired not long ago how things had been going with this and I realized it had been awhile since I last updated the situation. As the title of this post suggests, unfortunately we've had to put everything on hold after getting burned recently by the anemic housing market. Less than two weeks from closing on my wife's old house, now on the market for more than 39 months, the current renters had to back out of their contract which they had signed almost a year ago to purchase the home. Instead they are moving out at the end of February so not only did we lose the sale but also the rental income as well. Their financing fell apart at the last minute and so now there's much to do to get the house back on the market again by spring.
The result of this is that we're going to have to wait on moving to Asheville for the time being as we deal with these new circumstances. Our goal now is to have everything resolved by summertime and will hopefully then resume our ambitions for moving to the mountains. So while I'm still eager as can be to translocate the family, for now we're staying here and will likely only unpack things as needed but otherwise restore order as best we can. Candidly I don't know what's going to happen but I'm optimistic everything will turn out for the best. I'm very grateful for everyone who has been so encouraging of me and who so graciously invited me to come game with you once I have moved to North Carolina. I appreciate it very much and I'm sure that such a welcoming spirit will provide ample motivation to see me through the coming months. Demolition work on the house begins March 1st, hooray!
Well I've rambled on long enough tonight. I apologize for the amount of RealLife whining contained in this update, it was something I had wanted to avoid for that reason alone but I didn't know how else to explain the situation. I remain very hopeful however about our chances of still being able to move to Asheville in the near future. Besides it was a perfect 75 degrees today with beautiful blue skies so I think I should manage alright in the meantime. For now though I've got some Dark Elves to attend to... goodnight, everyone!
Posted by Papa JJ at 11:24 PM