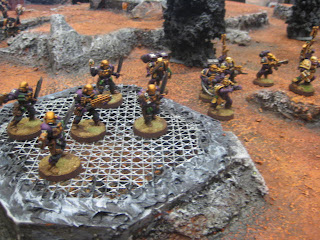 I don't have much time for blogging right now so tonight I just want to quickly show a few pictures I took at AdeptiCon of some really amazing Space Marines. I played in the Killzone event on the last day of the convention and had the good fortune of both playing against and then later teaming up with one of my favorite miniature painters, Chris Borer of Full Borer Miniatures. Having admired his painting for years and even taken one of his painting classes at the previous AdeptiCon, I had come to think of him only in terms of his work as an artist. It was therefore a particularly special treat for me to get to actually spend time gaming with him and have fun throwing dice with a winner of four Slayer Sword awards and more than twenty Golden Demon trophies. (Click here to see his tally of Golden Demons.) You can imagine then my elation when Chris even complemented my own Killzone team and said what a pleasure it was to play against a well-painted army!
For his Killzone team Chris brought a mix of Space Marines and Space Marine veterans primarily equipped for rather specialized roles, and complemented by a number of cheaper Space Marine Scouts. His team was lead by what I think was a Veteran Sergeant who had been upgraded to carry the special issue Medipack, and hence was modeled as a Space Marine Apothecary. The other members of the team included a Sternguard veteran, a Vanguard veteran, two basic Space Marines armed with a Heavy Bolter and a Flamer, and one more Space Marine with the standard equipment. Finally there were five Scouts, one carrying a shotgun and the other four armed with bolt pistols and close combat weapons. It seemed to me to be a really well balanced and quite lethal Killzone team and I believe Chris did fairy well with them in his games. Oh and they look fantastic, too! Check 'em out... 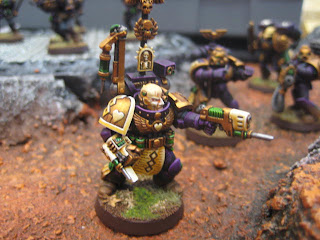 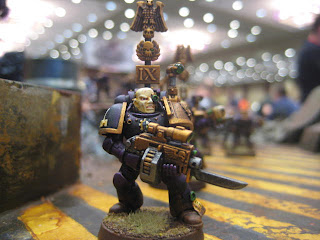 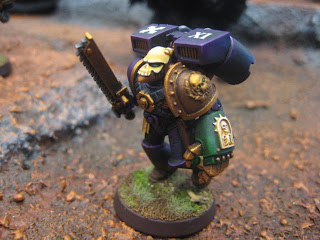 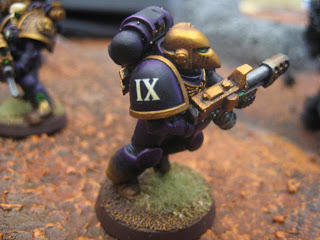 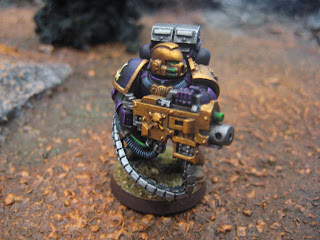 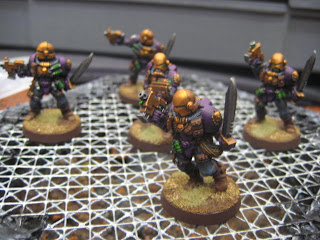 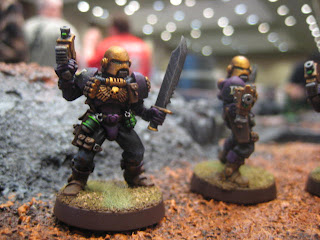 There was also one more member of the Killzone team, a very cool Space Marine posed in the act of throwing a frag grenade, but unfortunately none of the pictures I took of him turned out well. Too bad as it was one of my favorites from the bunch and I apologize for not getting the complete set photographed. Chris was very kind and allowed anyone who was interested to handle his minis and set them up for photos, an opportunity of which a number of people took advantage. So who knows... maybe I can track down a decent picture of that last Space Marine from this team.
That's it for tonight, however. I hope you enjoyed taking a look at these beautifully painted miniatures, I'm very thankful for the chance to share them with you. Happy gaming, everyone!
Posted by Papa JJ at 11:50 PM