I'm taking a break tonight from assembling terrain, the pictures of which that I've taken have been mostly either boring or unusable due to near constant toddler-attacks. I've included a few WIP photos at the end of this post just for the sake of completeness after my last posting, but I've got something else on my mind right now that I'd like to address first with this update. This evening I decided it was time to get back to my old Chaos Marines. After a decade of waiting for me to settle on something, they finally belong to a named warband, the Beasts of Annihilation. Having chosen this group based solely on their color scheme more or less matching the one already painted onto my army, this step forward has brought with it a new dilemma in that there is no established chapter badge or symbol for this warband. After taking so long to get to this point, I am eager to hurdle this stumbling block so that I can at last finish this army.
At first the name itself seemed somewhat silly to me, but over the ensuing weeks its appeal has grown on me, especially after an exchange about it with Sons of Taurus. The result of this shift in attitude is that I no longer know if I should go with my original joke idea. I therefore painted my candidate design onto a spare icon bearer, last touched by brush more than six years ago, as a test run. You can see the result below. Well, what do you think... have I taken it too far? 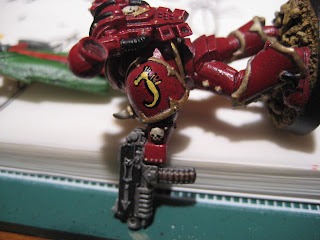 Other than the snout being a bit long, this is essentially what I envision as the Beasts of Annihilation's calling card to the 40k universe. I may try to add some orange shading on the belly but I don't know if it would be worth the effort. I haven't come up with any alternatives so if I don't go with the seahorse it's back to the drawing board. I enjoyed painting it and it passed the main test of not being particularly difficult or time consuming so for the time being I am satisfied with it. Also I would probably have fun doing larger versions of the seahorse on tanks and banners. I just have this nagging feeling that it could possibly be too inappropriate. Then again, I'm also working on a Simpsons army so I've probably already crossed that threshold of concern. Perhaps it was a millennium of taunts and jokes about the chapter seahorse that eventually drove the Beasts of Annihilation to embrace Chaos, due to bitterness and a mad desire to prove their mettle.
My inspiration for this comes from the real-world iconography of the 2nd Battalion, 4th Marines (2/4) with whom one of my best friends served for a number of years. Hence there is actual military precedence for this. I'm fairly sure I've also seen the seahorse used in heraldic devices, but that could have been mere fanciful depictions or even just a figment of my imagination. Nonetheless, seen below is the insignia of the aforementioned USMC battalion.

I'd love to hear any thoughts on whether I should go forward with the seahorse or if I instead need to rein in the stupid and find something more suitable for a bunch of daemon-loving meanies. What do you think?
Below are the photos showing some of my recent work on 7G. The first one is of the space-filler piece, previously consisting only of the pipe sections glued down onto the base, that I have now turned into an impromptu gun nest... 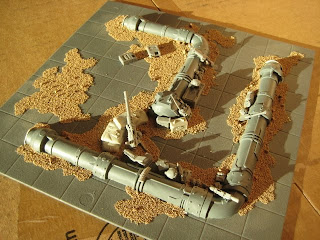 Next is a detail from one piece of a marine who has crashed through this building's ceiling, squishing some unfortunate fellow beneath him. Look for the hand poking out from under one of the tiles to see evidence of this pitiable ending.... 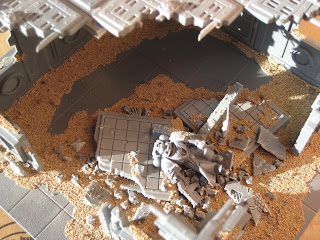 Seen below is a damaged building that has become a fuel depot to serve whatever vehicles or generators located in Sector 7G... 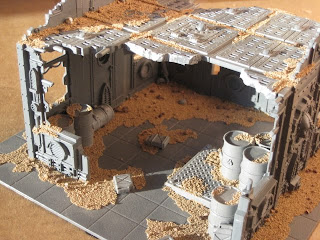 Lastly, a WIP of my next double sized building that I'm still putting together. (I ran out of pieces.) You can see I have used one of those shoddy, flimsy GW "moonscape" craters to reinforce the bond between the sections of the base. It worked out really well out in this case so I'm now planning more of these using the rest of my packet of craters. 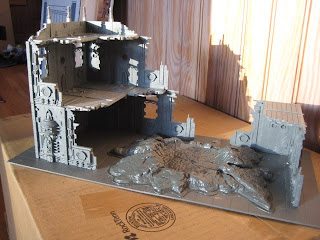 It's still slow going, but I feel like I'm getting the hobby winds behind my sail.
Posted by Papa JJ at 11:44 PM