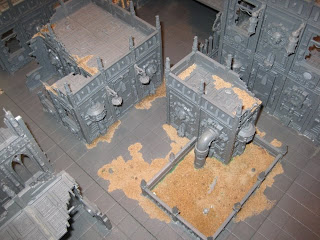 In an effort to build some much needed hobby momentum, I've spent time over the last couple of days working on a few pieces of terrain for 40k. It's been almost a year since I did anything with my "Sector 7G" cities of death project so this seemed like a reasonable place to start up again. When I last left off with it, I had assembled seven buildings with another two almost complete. Eventually I will expand this urban industrial collection by an additional four or five buildings along with assorted space fillers, but for now I just want to finish a few of the ones that I put together last summer. It will be good to finally check-off even a small portion of this from my to-do list, plus I'll still be able to use the terrain blocks individually as they are done. 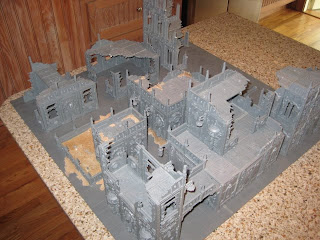 Here's a group shot of what I accomplished before setting them aside to work on something else... I believe it was Dark Angels. Nonetheless, I've begun detailing two of the buildings, the results of which can be seen in the above picture, but more clearly in the shot below, as evidenced by the scattering of sand and some Imperial Guard bits. I enjoy making little scenic additions to these types of pieces, which is the main reason why I chose to base all of them on the modular movement trays. Hence there are a couple of little vignettes that I'll point out once they're painted. Future construction efforts will involve making the aforementioned building sections, but with more emphasis on irregular footprints to help break up the monotony. 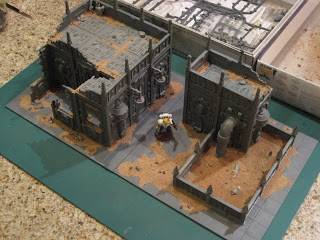 Those two structures seen above are the ones I've chosen to address first. The one on the left is the building that I first put together when I started this project. It's also the one that was first referred to as Sector 7G, prior to me deciding to put together a bunch more of them and call the whole group by that name, so this is kind of special piece for me. The one on the right, imaginatively named Pump Station, is the one that really got me motivated to start up again on this set of urban terrain. After painting, I'm going to fill the reservoir area with resin water effects (tinted, maybe?) and use the experience as practice for when I likewise fill the skull pits on my Realm of Battle Gameboard. It has only been about three months since I worked on the gameboard so it can still wait a bit.
The days have been predictably humid here and so I was not able to get these sprayed this afternoon liked I had hoped. Therefore I've planned a session of late night priming this evening. I'm still trying to get my painting situation sorted out, but until then I think messing around with Sector 7G will be a nice way of easing back into the swing of things. I haven't entirely settled on a color scheme for this set of terrain so I'd love to hear any suggestions.
Posted by Papa JJ at 11:39 PM