I'm home! After two weeks away it feels so amazingly nice to be home. We drove the entire way yesterday, taking about sixteen hours to make the trip this time. I had been worried about how my daughter would fare but it seems like she handled it far better than either of her parents and was in good spirits the whole time. Such a relief as my wife and I descended quite deeply into the road madness. I felt absolutely crazy last night while unloading the minivan around midnight after everyone else had gone to bed. To those of you who drive for a living, I have no idea how you do it. You must have much more mental fortitude than me.

Chautauqua Lake, New York
Of course there was far less time available for hobby stuff than I had originally hoped there would be, but I'm not disappointed. I had a great time with my wife's family and enjoyed the trip immensely, plus just ten minutes or so playing roulette at the casino in Niagara Falls essentially paid for the whole vacation. Thanks, Canada! (7, 13, 23, and 32 were the lucky ones if I remember correctly.) Even better than that, my wife surprised me completely with a moog theremin kit seen below as my anniversary gift. Lastly, my brother-in-law gave me a copy of Escape From New York autographed personally to me by John Carpenter. Fortune smiles upon me. : ) 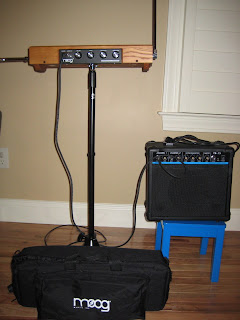 Even though I didn't get any actual painting done, I decided early on that I wanted to focus on getting as much assembled and primed as I could with the time available. I was able to put together another twenty Imperial Guardsmen of the Blisstonian 9th and textured the bases for all of the assembled models. In a spraying frenzy the last night we were there I primed 54 infantry and the Deathstrike. The only thing I didn't get to was the single Sentinel that I had with me, but that's okay as I ran out of primer at around 11:40pm. I then packed everything up and loaded the family truckster, giving me three hours of sleep before waking to drive the first shift. In the quiet of the morning, a startling thought occurred to me:
The expression, "saltwater in his veins," doesn't really make sense.
Whether you're a sea captain or not, we all have saltwater in our veins. It's why you get saline in IV bags, right? It's been a while since my medicine days, but I don't think I've forgotten that much. Oh well. At 5:00 am this provoked in me a feeling of profound indignation and confusion.
Regardless, I now have enough models ready to keep me busy painting for a few months at least. Meanwhile I can also assemble another batch of figures and be poised to take advantage of better weather in the upcoming fall and winter. Based on Nesbet's suggestion, however, I am considering investing in an airbrush as a more long term solution to the challenges presented by the consistently high humidity where I live. I want to do a little more research but being liberated from worrying about weather sounds fantastic to me.
Okay, that's it. I'm optimistic about finally having something worthwhile to show in the near future. I've got my painting space sorted out and I have miniatures ready to go. Time to get painting!
Posted by Papa JJ at 11:37 PM