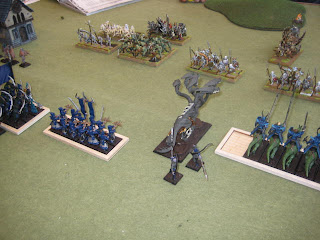 With the dust settling from AdeptiCon and the sounds of battle finally fading away, I am happy to report that I had an absolutely marvelous time! I will have plenty to report on in the coming days though it will take me a little while to get things in order and to sort out my thoughts on what took place. Unfortunately after spending almost all of Monday dealing with some... ahem, car troubles... it wasn't until after 6pm before I at last departed Chicago and began the thousand mile drive back to Charleston. I therefore did not arrive home till the wee hours of the morning on Wednesday and only now am starting to feel recovered from the past week. It was an amazingly good trip but has nonetheless certainly taken its toll on me. :)
AdeptiCon was a fantastic weekend, by far one of my most enjoyable hobby experiences and well worth the long journey and the associated expense. Every one of the twelve games I played in was a blast and in the process I didn't meet a single gamer whom I'd avoid playing against in the future. The games were fun and exciting and the opposing players were uniformly good sports, patient and fair. I couldn't have asked for a better lineup of people with whom to spend a few days rolling dice.
Besides the games which I enjoyed thoroughly and the huge amount of inspiring models, another highlight from AdeptiCon was meeting and befriending so many wonderful people, either across from me at the gaming tables or else those I randomly encountered while wandering the site. Along with all of my opponents from the weekend, I was also fortunate to have met many wonderful gamers and painters and enjoyed every minute spent talking with them about our shared hobbies. So that I don't forget to do so later, I would like to thank and say hello to the following new friends:
TheDude (aka GopherDave) of Armored Gopher Games.
Neil from the Dark Future Games crew.
Bill/Nix of The Dead Tau Project and Gamers Lounge.
Dave Pauwels of Gogon Studios.
Hoagy from When Cannons Fade...,
Dethtron of Dick Move fame,
and their bandmates from Crusader, Joe, Ian, and Brad.
Aaron V., Nick H., and Robert C. from the Friday tournament.
The members of Team Snake Eyes - Iron Hands contingent.
The members of Checkmate Hobbies and Skull-N-Bonz.
Brent of Strictly Average whom I accosted in the elevator.
My teammates Wolf Lord Pat and Company Commander Josh.
Chris Borer of Full Borer Miniatures
b.smoove of A Gentleman's Ones
Also I want to thank all the staff and volunteers who obviously put in a ridiculous amount of effort into making AdeptiCon as much fun as it was. Lastly I want to thank my good friend who has tolerated my antics for many years, DrGabe of DrGabe's Miniatures. Once again being able to hangout like old times was the best part of the weekend... thanks, buddy! It's my hope that I will get to see lots of these same good people again before next year's event, but if not until then, that will be yet another reason for me to look forward to AdeptiCon in 2012.
I do intend on reviewing the various events I played in at AdeptiCon though I haven't decided yet on the manner in which I will do so. Since I'm not sure if I was ever clear about my schedule before leaving for Chicago, essentially it was the 1000pt Fantasy tournament on Friday, the 40k Team Tournament on Saturday, and the Killzone event on Sunday. I expect I'll at least put together a separate report discussing each of those tournaments although I likely won't try to do a full battle report for every one of my games. But for now I've picked out a sampling of pictures from my weekend to sort of preview what I will be posting and talking about over the coming days. 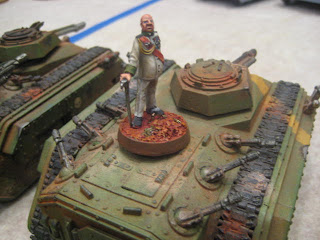 "Follow me, men, I know the way to VICTORY!" Famous last words... 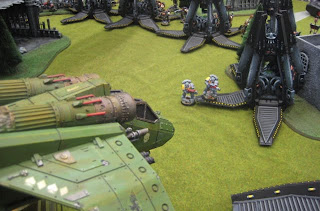 Mere seconds before rolling three of my many twin-linked misses of the day.... 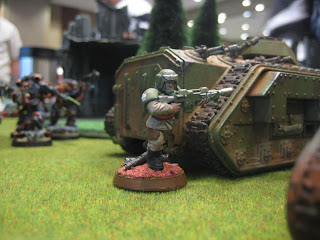 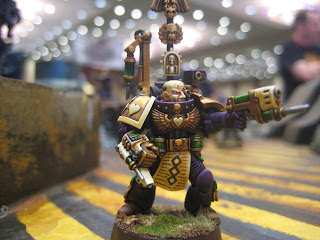 One of Chris Borer's amazing marines from his Killzone team, of which I will show more in its own post... 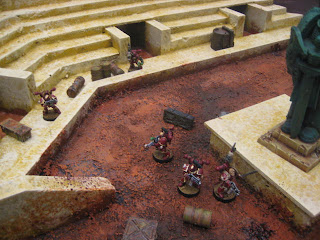 Beasts of Annihilation enter the Killzone, never to be seen again.
I will begin organizing my AdeptiReports later this evening so hopefully I'll have more ready to post soon... until next time, take care and happy gaming!
Posted by Papa JJ at 2:38 PM