Hello, friends! Today I am writing to you from my hotel room in beautiful Lombard, Illinois, now with just under a day to go until my first event at Adepticon. Woo-hoo! After unloading my gear last night and settling in to my new home for the next four days, I tried to put in some time with the brushes but was too worn out from the drive to make much progress. No worries, though, as I am set to spend the day painting away on my Dark Elves. Also DrGabe should be here in a few hours and he says he is looking forward to helping me out as my painting assistant. Hehehe... sucker! :) 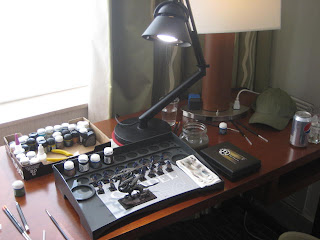 I'm sure I'll be busy not only today while painting but also during the Con itself. I therefore don't know how often I'll be able to post updates while here but I will check-in when I can. If you're interested however I believe DrGabe will be posting twitter updates during AdeptiCon so you can follow along with his own adventures in gaming by that means. Our schedules wil overlap somewhat although he is playing in only 40k events during the weekend. He does already have pictures of his army posted which can be seen here and here. I'll be commanding part of his Imperial Guard army, the Cadian Blackjacks, during the 40k team tournament on Saturday. I don't know yet which portion of the army will be fighting and dying for my glory, but I do have my eye on a certain HQ model that looks suitably distinguished... 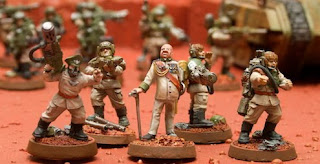 Okay gang, I've got painting to do... I hope it's a great one for you and that anyone traveling today has a safe and pleasant experience. Take care!!
Posted by Papa JJ at 10:46 AM