Nope, I'm not dead yet. :) Trying my best not to fade away, either. I'd say it's therefore time for a little bit of updating. 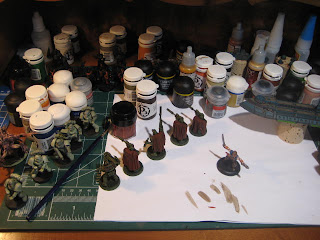 After staying busy throughout October, my family and I then hit a rough patch at the start of the current month. Nothing too dire, mind you, but stressful enough to kill most of my hobby and blogging motivation for the past few weeks. Normally painting is a great relief for me but I was in too much of funk to even pick up a brush for a while. Fortunately everything seems to be working out for the best now and I've started to get my hobby-groove back. Yippee!
Thus with the will to paint having been restored I finally got down to business and began working on my Sea Dog for the charity auction Project: Orange Crush (Hunger), part of Foodmachine 2011. (You can see my original post about getting involved here if you like.) I finished painting my pirate this past weekend and I'm really pleased with how he turned out. I had planned on keeping this under wraps until the auction goes live but I'm simply too excited to wait that long. Therefore I'm going to hold off from showing any further photos for the time being, though I cannot resist presenting at least one shot of my contribution to the effort. I'll have plenty to say later on about painting the miniature and the project itself, but until then here's the first look at my Sea Dog: 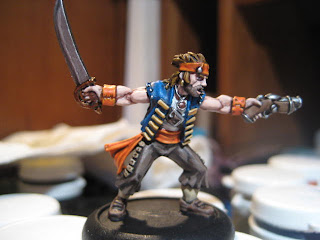 While painting my pirate I also spent some time thinking about the hobby in general and what I would really like to be doing with it. To help me out I reconvened my war council so as to determine the best use of my hobby time. After some discussion concerning various army projects and the different game systems with which I've been experimenting, it became apparent that I have not adapted to my new environment and instead I have continued on as if I were still living in a hobby wasteland. Despite moving more than six months ago to a much more gamer-friendly city, I have been slow to take full advantage of these new opportunities.
Once again I had allowed side projects to take precedence over my painting time, neglecting what I had initially intended to focus upon after moving to Asheville. While I am still very keen to get deeper into Dystopian Wars, Infinity, Malifaux, and Flames of War, there is just no way these other games can compete locally against 40k with regard to the availability of opponents and the potential to play games on a regular basis. I was starved for gaming in Charleston, yet now it would be no problem at all for me to play a few games of 40k every week should I choose to do so. I have been dissatisfied however with the state of my armies for quite a while and so, in order for me to get back into proper 40k-gaming form, I have decided to rededicate myself to working on my Raptors Space Marines. 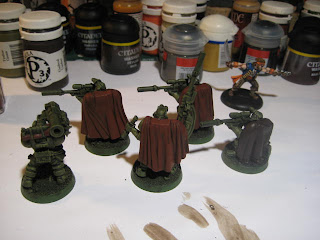 Ideally I'd like to have 1500 points worth of Raptors painted by the end of this year. From there I will continue to expand the army with the goal of having significantly more painted in time for the release of 6th Edition. I always feel like I'm caught flat-footed whenever a new edition comes out and so this time around I want to be prepared as much as possible by having an army I'm happy with painted and ready to go as soon as the new rules drop. And in the meantime, if all goes accordingly, I'll have something I can take to the FLGS so as to enjoy these waning days of 5th Edition. That's my plan for now at least and I'm starting off by painting a squad of sniper Scouts.
The last thing I want to mention for this update is that starting tomorrow I will be doing another little giveaway for those of you Following my blog. I'll most likely post the details sometime tomorrow night (November 24th) though I'm not exactly sure when due to it being a holiday and the potential for post-turkey lethargy. At this point I just want to give everyone a heads-up in case you're interested. It's going to be a simple random drawing so all you'll need to do is check in occasionally to find out if you've won.
Okay, that's it for now. I hope everyone is doing really well... happy painting and gaming!
Posted by Papa JJ at 11:11 PM