Hey, I'm back! Sorry about going MIA from the blog the past couple of weeks, I've been really busy with family stuff and all that jazz. No time for gaming, blah blah blah... let's get on with it! :)

A few minutes ago I was flipping through the new issue of No Quarter Magazine and right away noticed mention of the upcoming Foodmachine 2011. The idea behind Foodmachine is to encourage Warmachine and Hordes players to organize a bunch of events between November 1st and January 2nd as a type of food drive, the entry fee to play being canned food for donation to local food banks. Participants in these events are allowed to purchase "Cheats" for use in their games by bringing along more canned goods. The more you donate during the event, ever more powerful cheats become available for use. All the details about this charitable cause, rules packets, and info about the various cheats can be found by clicking the link already provided.
If you're more of a painter than a gamer, however, there is another way to get involved. This year the organizers want to auction off a complete Tier 4 army, to be made up entirely from painted miniatures donated to the cause. Here are the details for this project copied from the main website:

We’re also kicking things up this year with a companion event for all the hobbyists out there. Orange is the official color of hunger awareness and so we wanted to combine that aspect of the charity into Foodmachine. Project: Orange Crush (Hunger) gives hobbyists the chance to devote their special talents to the cause.

We've drawn up a Tier 4 Shae army full of pirate models. We’re asking the community to sign up to paint a model from the army in an orange scheme of their choosing. The army will then be auctioned off for charity. Privateer Press' studio painter, Matt DiPietro, will be painting up Captain Phinneus Shae and the Commodore cannon in an orange-based paint scheme. In addition, this year's Formula P3 Grandmaster, Zach Lanier, will be painting up Dirty Meg for the army.

To participate, follow the link (here) and sign up to paint one of the models. Glue the model to a normal base but do not add any flocking. After you have finished painting it up, mail the model to Matt at Privateer Press:

Privateer Press will be basing all the models and the photographing them in preparation for their eBay auction. Your model must be at Privateer Press by December 2nd, 2011.

Pretty cool, right? I dig that our gaming community embraces these charitable causes and so I've signed up to paint a model for the army's unit of Sea Dogs. Pictured below is the smart-looking fellow that I'll be working on to help CRUSH HUNGER... um, pirate style of course: Along with painting my own miniature, if possible I'd like to recruit some additional painters to work on the rest of the Sea Dogs that I have. Therefore if you are interested in painting a pirate for charity, but do not have any of the requisite minis that are being sought for this project, I'll gladly send you one of my own scurvy bastards by express mail. Just be sure that you can have him painted and shipped out in time for your mini to arrive in Washington by the December 2nd deadline. If that sounds good to you, go to the website's google document and sign up to paint one of the remaining Sea Dogs. Then send me an email or leave a comment indicating which of the following minis you want to work on for Orange Crush (Hunger). 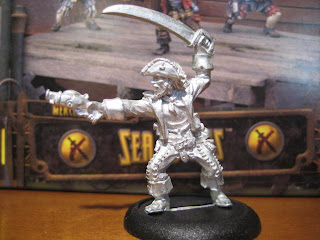 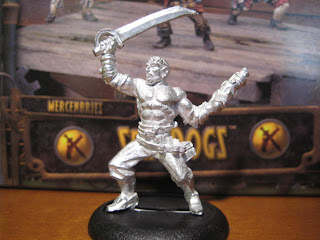 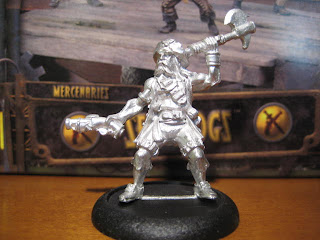 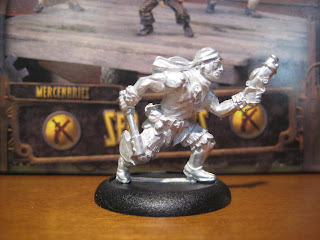 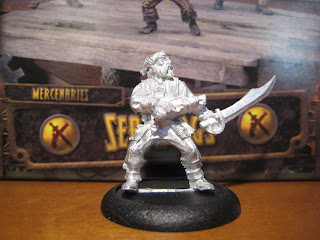 Sea Dog #5
Alright, that's it for now. If anyone is interested in painting one of these dudes for a good cause, please let me know as soon as you can. So until next time... Aargh! ;)
EDIT: I will update this post as I hear from interested painters, making note of which models have been selected and which are still available. The ones chosen so far are: Sea Dog Crew Leader, Sea Dog #2, Sea Dog #3, Sea Dog #4 and Sea Dog #5. That leaves the following still available to anyone who would like to contribute some of their time to this charitable effort...
Nothing's left!
All the miniatures now have painters!
Woo-Hoo!!
Thank you again to everyone who has gotten involved, I really appreciate it!
Posted by Papa JJ at 6:25 PM