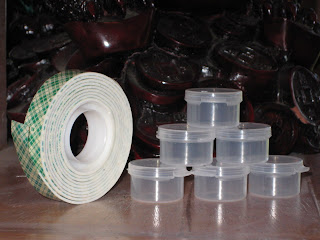 Last summer while shopping for craft-type items for our wedding, my wife and I spent a fair amount of time searching through the mass of stuff at A. C. Moore, a large art-supply chain. I couldn't help but also check the aisles for anything that might be useful for painting miniatures or wargaming. As luck would have it I came across a bunch of these little paint pots sold in packets of a dozen. Inspiration struck me as I looked at them... they would make perfect stands for use in painting miniatures! I purchased two packs for I think less than a dollar each and set about looking for some sort of temporary adhesive to use with them. I've tried regular double-sided tape but was not impressed as it seemed to lack the strength needed for metal miniatures, even those as little as the 15mm scale ones. Fortunately I found some Scotch brand double-sided poster mounting tape that looked more rugged and thought it would at least be worth giving it a try. As it turned out the paint pots and mounting tape have worked out perfectly. That tape has a foam-like center so you can really jam a miniature's base tab down into it. The adhesive sticks very well to both metal and plastic but you can easily pop the figures off once they're complete.

It was the success of this method that really gave me the spark that I needed to begin painting again in earnest. In the past I painted 15mm miniatures (almost exclusively for DBA armies) after I had already glued them onto their base, typically in groups of two to four miniatures. This was mainly due to my desire to start playing even before I had things painted, although it also provided a nice handle for painting. However a few years ago I finally decided to try painting them separately and worry later about coming up with a workable way to texture and paint the bases. This was stymied though when I couldn't find a good way of holding onto the little buggers well enough to be able to paint them. But now that I'm using the paint pots and have a suitable basing method, I doubt that I will ever go back to my old ways. The quality of my painting has improved and even their bases look better too.

Even though they've appeared in my earlier Work-In-Progress photos, I have included two more shots of my painting stands in action as further illustration. I want to take new photos of my finished HYW English elements and so thought these shots below could in the meantime serve as a preview of the painting I did in the Summer and Fall of 2008. 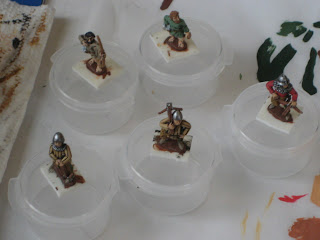 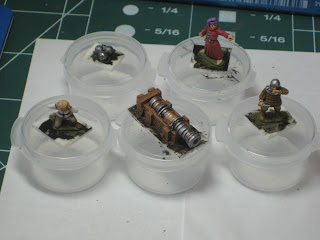