Flashbacks and Nightmares: The Call of Cthulhu 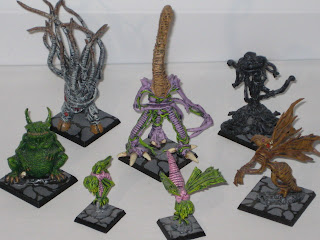 While digging through a box of old miniatures, I came across this handful of RAFM Call of Cthulhu models. I'm not sure when I painted them but have a feeling they come from the early to mid 90s, making them probably fifteen or more years old. I was reading tons of Lovecraft back then and loved everything Cthulhu. As a miniatures guy as well, I bought these over the course of a few years and then painted all of them in two days. I sure did paint a hell of a lot faster in those days... ;) I may have planned on using them somehow for the CoC roleplaying game but I imagine there would have been significant scale problems with that. So they ended up being display pieces that spent the majority of the last decade or so squished between layers of bubble wrap in a humble shipping box.
Anyway, I thought it would be fun to post some pictures of these madness-inducing monsters as sort of a look back at my painting past and such, especially as most of these figures appear to be no longer in production. I remember it being enjoyable to paint those crazy colors but my miniatures still fall humorously short of inspiring any of the same type of fear and insanity as their literary counterparts do. As hard as it is to represent Lovercraftian horror in art, I was never going to be able to do it real justice with little metal models. Regardless, I still think they're some cool buggers and I'm glad I held onto them all this time.
After taking just a couple of photos I noticed my camera was no longer focusing properly on the miniatures. I don't think I did anything improper but suddenly all of my pictures were turning out either much too dark or else very blurry. Hmm, surely a sign of the mythos at work. The only way I could get anything at all in focus was to put the camera right up to the model and then use the flash. The pictures looked weird but didn't seem all that inappropriate considering the subject matter. Well, if that's what Cthulhu wants, so be it. I decided to just make do with the conditions at hand and play around a bit, taking somewhat unusual shots that emphasis for me the sense odd angles that make Great Old Ones smile. Plus another lesson I've learned is don't mess around with cosmic evil, or else Cthulhu will break your camera.
So here's some blurry, overexposed pictures of weirdly colorful Mythos creatures for your enjoyment... hooray for random posting! 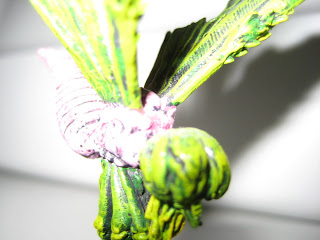 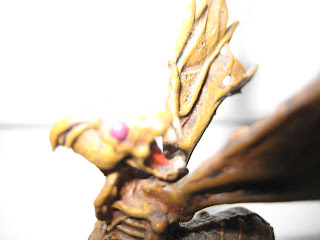 ???
(I can't remember this guy's exact name, but it was something like Byakkhi... I'll look it up when I can.) 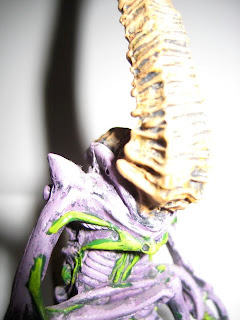 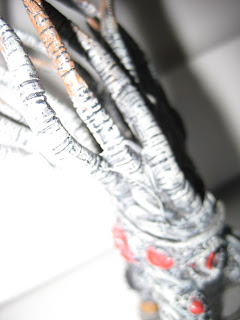 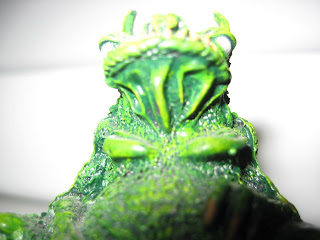 Tsathoggua (one of my personal favorites of the Great Old Ones)
[EDIT: The pictured mythos creature above whose name I couldn't remember is called a Byakhee, so I was at least close.]
Posted by Papa JJ at 11:48 PM