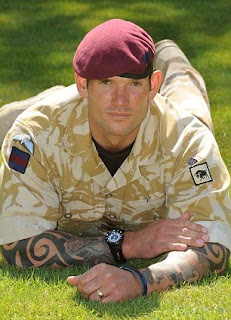 ... by approximately 8,117 feet! British army sniper Craig Harrison recently killed two Taliban machine gunners from 1.54 miles away, surpassing the previous record by 148 feet. The 8.59mm caliber bullets took three seconds to reach the Taliban fighters who were actively firing on his commander's vehicle.
Wow. That's some impressive shooting, especially considering he had previously had both of his arms broken in a roadside bombing attack.
As a former military kid, I am grateful to all those who serve.
Full story here via the UK Daily Mail. (I apologize if this is old news for people, I just saw the story myself.)
Posted by Papa JJ at 8:48 PM