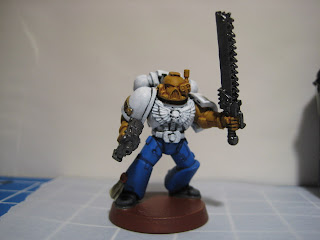 I've been working away at the test mini for Captain Homer's color scheme and think I should be able to finish him up tonight. I could easily spend a lot more time on him trying to correct all my mistakes and get things right, but since I'm doing this just for practice I'll most likely stop long before then. I'm quite satisfied to see my vision of a Homer marine finally realized and don't mind leaving it a bit on the sloppy side. There's really not much left at this point that I still want to do, primarily just highlighting the yellow and then having my first go at painting the chapter badge. After that I think I'll be ready to move on to the next version.
I'm thankful for this practice run as I have decided to do a couple of things differently on the next one. Even though I'm happy with how the painting has gone so far, I am pretty sure my experiment with white primer has ended in failure. I appreciate the vibrant quality of the paints over white but I haven't noticed anything so different as to make it worthwhile. Plus I haven't had any problems getting Foundation Paints to cover black primer which is my preferred starting point. I have a feeling grey primer would work well for this color scheme but I don't want to buy a can of it for only one model. I also seem to have a lot more trouble getting a smooth coat of paint from white primer and you can see especially in the last picture some grainy clumping. I live right next to coastal marshlands so humidity is always going to be an issue for me. I'm therefore willing to do almost anything to avoid additional complications in using spray primer. I think I'll try painting a yellow helmet primed black just to be sure, though.
Okay, that's it for now. I hope to spend a little time this afternoon practicing drawing the Stonecutters' symbol in anticipation of doing some freehand painting tonight. I haven't had much time to paint the last couple of days but I'm trying to make the most it. Also this weekend I plan to get some more done on the gameboard so hopefully the next few days will be productive. 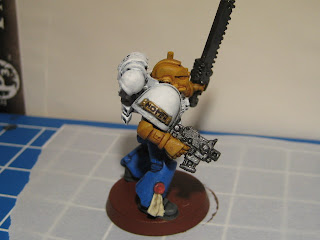 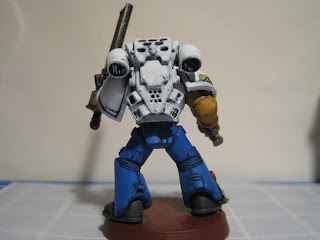 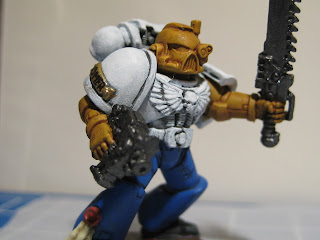