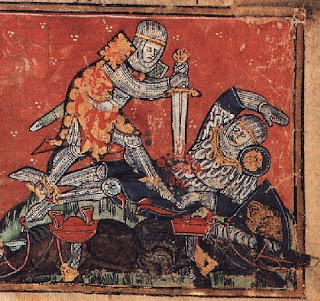 I haven't mentioned Warhammer Fantasy since 8th edition was released when I decided to start a new Bretonnian army. I've been quiet about this undertaking since then because I have not made any progress that seemed positive or worth discussing. The past couple of months have seen me become increasingly frustrated with my choice of army as I've struggled with list after list to make an army that lives up to my early enthusiasm for the chivalrous blue bloods and their filth-encrusted peasantry. I simply cannot find a force hiding in the Bretonnian army book that I like.
When I chose to go with the Bretonnians I was somewhat aware of the challenges this would bring, though not entirely so. It would seem my "careful" consideration was not as carefully considered as I had thought. I was not foolish enough, however, to believe I would be able to come up with a super-tough list capable of competing against strong opponents. All I really wanted was an army to use in some fun games against friends, thus allowing me to return Warhammer Fantasy to my gaming rotation after my interest in it had waned over the lifespan of the previous edition. Yet even with these modest goals in mind I have not been able to put anything together that excites me enough to begin investing the time and money needed for a new army.
So what's a fella to do? For now at least I'm stepping back from my pledge of loyalty to Bretonnia and the Lady of the Lake. While it may cause my Dwarf army to label me as an oath-breaker and refuse to ever fight for me again, I think this is my best option. I don't want to fall into the trap of forcing myself to work on an army I'm not excited about as there are numerous other projects I'm eager to tackle. As a finicky and easily distracted hobbyist, I finally learned that it's almost impossible for me to get very far with an army when I'm less than fully enthused about it. Despite the frustrations necessary to bring me to this point, I am at least grateful to have recognized my issues with the army before putting forth any significant effort.
Eventually I'd like to get back to these Bretonnians though I have no idea when that will be. It feels to me as if the army currently lacks in variety, a problem which is exacerbated by the fact that several characterful units I'd like to include are not well represented in the range of Bretonnian miniatures. For example, weren't there at some point more than five Questing Knight sculptures? Two rank-and-file variants just seems to me woefully inadequate for a unit that should have lots of individual personality. In this particular case I could set about trying to convert or kit-bash some models of my own but that sounds like a lot more than I'm willing to do at this point. Therefore, confronted with an army book that doesn't particularly captivate me and a range of miniatures that leaves me wanting, I think it would be best to set aside the spurs and lance until Bretonnia receives its update for the new edition.
While I'm content to hold off on the Bretonnians, there's still the fantasy itch that needs to be scratched. I started to look again at what other armies I might want to collect but so far nothing has jumped out at me. I thought it would be fun to work on a new army to coincide with the latest edition of the game but it's certainly not necessary. I still have a couple of functional armies which I can use in friendly games of Warhammer, but they've become sort of stale feeling to me over the years. Nonetheless I would like to work on something of a more fantastical sort so as to satisfy that part of my gamer soul not currently fulfilled by chainswords and plasma guns. Hmm, what to do?
Oh yeah, there was that other game that had captivated my attention last winter... Hordes. Or more properly, HORDES!!!! (PP's penchant for capitalization still cracks me up.) The game offers lots of cool monsters, crazy warlocks and spells, and some really bizarre factions to choose from, all of which sounds to me like a winning combination. Plus every model I worked on before was a blast to paint and I doubt I could ever tire of painting monsters. The more I think about, the more convinced I am that this is where I need to look to get my fix of fantasy gaming.
In fact the last miniature I painted before my unanticipated five month break from the brushes was a Lord of the Feast for my Circle Orboros gang. I already have 20ish points of Circle Orboros painted and another 15 points or so worth in boxes, as well as 35 to 40 points worth of Skorne models waiting around in their original packaging. Therefore my plan going forward is to cease worrying about doing something new for Warhammer Fantasy and will instead turn to Hordes for my swords-and-sorcery gaming enjoyment.
Best of all, this is the perfect time for me to return to Hordes as the faction of my dreams is just now being rolled out, the Blindwater Congregation: 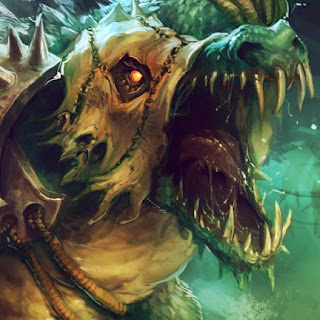 Crazy voodoo alligators... I think I may have just fallen in love.
Posted by Papa JJ at 11:48 PM