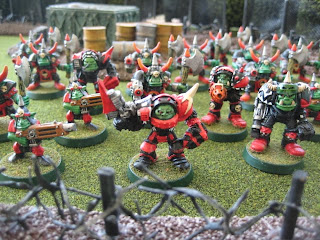 It's going to take some time to get my new team "Baker's Dozen" ready for use in games of Killzone but I do want to start playing as soon as possible. To that end I've spent some time over the last few days merrily going through boxes of miniatures to see what could be used right away. I made some nifty discoveries which I'll be writing about over the coming week or so, the first of which I am presenting tonight in the form of these two opposing Killzone teams.
The beta edition of Big Jim's Special Operations: Killzone is poised for release tomorrow but I thought I'd enjoy putting together some teams to start getting a better sense of the game. These are likely rather basic teams comprised almost entirely of standard models with very little in the way of special equipment or personal upgrades. I therefore don't anticipate having to make too many changes to them to stay in line with the evolving ruleset or to scale down for lower point games. What follows is a look at the first set of teams that I will be trying out in the coming days, Space Marines and Orks 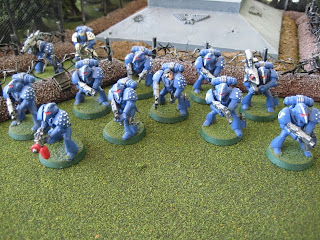 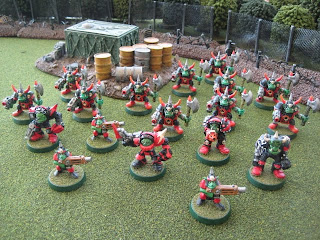 Killzone: Orks - 250 Points
Nob (Team Leader): slugga and power klaw, 'eavy armour (50)
Nobz x 2: slugga and power klaw, 'eavy armour (100)
Nob: slugga and choppa, 'eavy armour (25)
Ork Boyz x 11: sluggas and choppas (66)
Gretchin x 3: blastas (9)
Again nothing fancy with these guys but there are at least some grots and nobz providing a little variety to the list. The goal with this group was to max out on the number of models allowed in a single Killzone team so that I can try out a more screaming-horde style of play, if such exists at this scale of skirmish gaming. I don't think of these Orks as a specialized team chosen for a particular mission but rather simply those Nobz and their underlings who happened to be closest at hand when the opportunity for a fight presented itself. They're Goffs so I think they'd approve of that approach.
I should be able to start playing games of Killzone this week with only a few scheduling details that still need to be resolved. Until then I'm going to put together some more teams including ones for Imperial Guard, Chaos Marines, Necrons, and Tyrandis, though without anything nearly as vintage as the miniatures featured in this post. I'll also check to see if anything needs to be adjusted for the Ork and Space Marine teams once I've had a chance to read through the new Killzone stuff. I'll post some sort of update to cover all that.
Oh, and there's quite a lot of painting to do as well. Good times ahead. 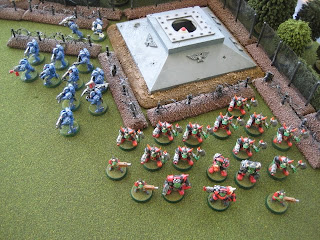 A classic match-up: blue marines vs. ork clones.
In time I'll report on how things go once I've played through a number of the scenarios. If everything works and Killzone turns out to be as much fun as I hope it will be then I may also attempt writing one or two more detailed reviews of individual games. Regardless I'm sure I'll have plenty to chatter about soon.
Okay, time to paint!
Posted by Papa JJ at 8:41 PM