My Return to Painting 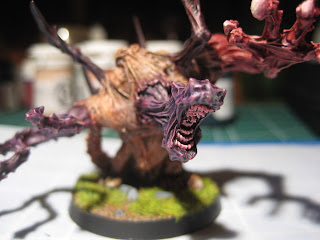 I painted something! Yippee, it's a Chaos Spawn.
Well, it certainly has been a long time since I previously had anything newly painted to show here. Hopefully this will be the last warm-up miniature that I have to paint for a long time. This particular model has been waiting for something like five years for me to get to it, one of the last few unpainted minis for my Beasts of Annihilation chaos warband leftover from when I was last working on them. I came across him earlier this summer and decided I would save it a little longer until I was about to starting painting again in earnest and would be in need of something on which I could practice.
Since updating the Beasts of Annihilation is one of my current projects I thought working on the Spawn would be a good way of getting back into my painting groove. Having just finished I am very satisfied with the experience. It was fun to paint, I got to have freedom with the colors and techniques used, and I added a cheap throw-away unit to one of my armies. Cool. The best thing for me though is knowing that I have this mini out of the way and now feel comfortable setting into the models that I'm more excited about painting.
May my brushes henceforth stay rust free. 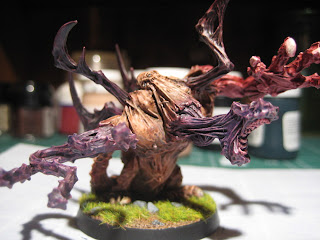 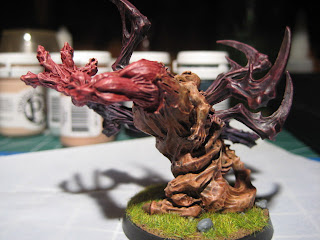 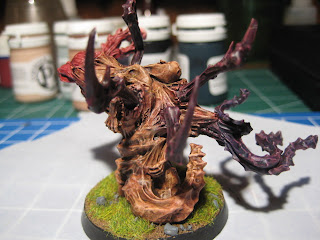 As for the actual painting, I wanted to keep this Spawn related to the Beasts but with a little extra touch of color as befitting its warped natured. The bulk of the creature's body was painted to resemble as closely as I could the army's unit of Plague Bearers. I don't think I was terribly successful in achieving the same effect but I'm happy with the results nonetheless. It was a joy painting the rest of the miniature as I worked with the vibrant colors and experimented with an approach to highlighting and color progression different from my usual habits. I love models like these as you can just be free and try out new things. 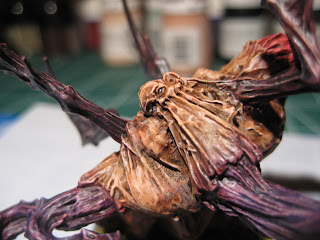 One new technique I tried out which can be seen in the picture above was using slightly off-shade variants of white and black to paint the model's eyes. This was described by Brent of Strictly Average not long ago and I tried my best to follow his instructions. I didn't get the shape quite right but otherwise I really like the way they turned out. I think the eyes look appropriately vacant considering this fellow's circumstances and I'm going to look for opportunities to paint more eyes in such a manner. In this case I used P3 paints, going with a 1:1 mix of Thamar Black and Coal Black followed by Underbelly Blue for the off-white center of the eyes. Even with a wobbly looking right eye I am overall very pleased with the results.
I'm considering applying some gloss to the eyes or mouth but otherwise I think he's done. It's truly such a relief to finally get some paint on a miniature and I feel much better already. Thanks, weird Spawn guy!
Posted by Papa JJ at 11:41 PM