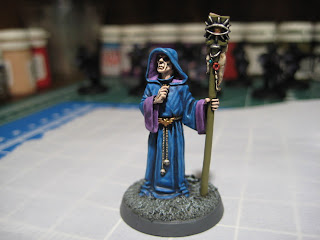 Last night I finished working on Plant Manager Burns, my counts-as Primaris Psyker for the Blisstonian 9th. Overall I'm happy with the results and will gladly put Burns down on the table, leading his army of disgruntled workers in defense of Sector 7G. I think the astropath miniature turned out well and does a good job of expressing the contempt in which Burns holds his minions. In particular I like the jutting jaw and his pallid complexion. 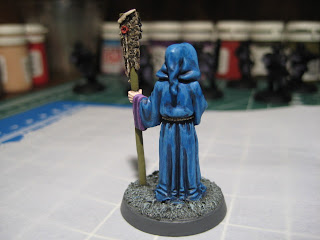 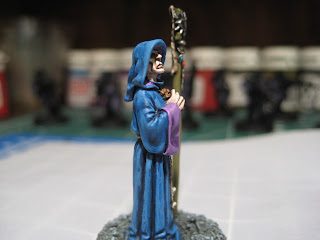 As can be seen in the pictures there are quite a few things I could try to fix but I'm satisfied for now and am ready to move on. The parchment tacked to his staff turned out rather messy as I was impatient and used a wash without waiting long enough for the lettering to dry. Also the staff itself looks unfinished but I've never been able to paint those properly. I did spend some time trying to fix the weird highlighting on his robes which I noticed in my earlier WIP photo, but a few prominent areas still look pretty funky. Nonetheless these issues don't bother me enough for me to want to put more work into this guy and I like where he's at now.
Plant Manager Burns is complete, up next for painting will be the first squad of Blisstonian 9th penal legionnaires.
Posted by Papa JJ at 3:31 PM