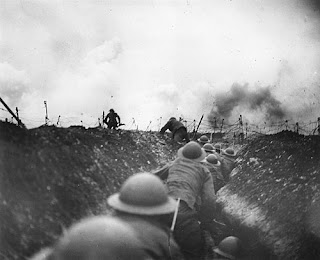 With a new army in the works I have understandably been thinking a lot about how I want my army to look and what I can do to achieve this vision. In the past I have always liked to do some minor conversion work on my models, usually just changing slightly a pose or kit-bashing an HQ or hero but I've never attempted anything more significant than that. I've recently chosen to base my Stonecutters off of the newly released Codex: Blood Angels and have been examining it in terms of how I can express my Simpsons theme using those units available in the list. Again I do not foresee having to do too much conversion work on this project, with the exception being two of the three HQ units which I believe I can use to express my army's theme. But as I consider how to build these two individuals, The Sanguinor and Mephiston for those who might be curious, one of my primary concerns is to avoid any unintentional, in-game advantages such modeling might confer. Why do I worry about this? It is because of true line of sight.
The rule known as True Line of Sight presented on page 16 of the main rulebook was one of the most notable and initially controversial changes when going from the fourth to the fifth edition of Warhammer 40,000. I was worried at first about it but after some experience came to appreciate this way of reducing the amount of abstraction within the game's mechanics, in particular with things like area terrain. Can you see it or can't you... simple right? Also it encourages players to crouch down a bit for that soldier's-eye-view of the battle which is fun and cool in itself. I always liked doing that anyway even before this was a rule as I'm sure many others did as well. I also suspect that I am not the only one who finds it irresistible to peek through the window of a multi-storey terrain piece, imaging myself to be a sniper looking for his next target. The fact that this is now an integral part of how the game is played therefore seems to be an overall improvement as it makes the experience more immersive than ever before.
And so I've come to generally like the usage of TLoS in 40k, though in the last few months I have become increasingly aware of a potential downsid to this rule. TLoS makes the game in its current iteration so much less abstract than those of the past it is as if WYSIWYG has been expanded from the level of individual models to now encompass the entire table and everything on it. For all its advantages, I believe TLoS presents an unexpected limiting factor on the scope of conversions and modeling, as well as placing an undue emphasis on the design of the official models. While it may not be a big deal, this is unfortunate for a hobby that also strongly encourages creativity and the imagination. This very well could have been a concern for gamers using earlier editions of the game and I just was not aware of it at the time, but my sense was that crazy and wild conversions were applauded rather than challenged. It's hard to look through an old White Dwarf and not see at least a few bizarre constructions. I have no doubt that there have been arguments concerning "fair" modeling for as long as there have been templates and bases, but it seems to me that this type of kvetching has gotten louder as the understanding of TLoS and its impact on the game has grown.
It may seem paranoid of me but I would prefer to avoid having to defend whatever modeling choices I end up making for my army. I started thinking about all of this because over the past year or so I have in fact seen people defend their own such decisions quite a bit. As a recent example from early March, Rob Baer (MBG) of Spikey Bits posted an article at Bell of Lost Souls showing off his pair of Supa Battlewagons. When the Battlewagon kit was first released I was a little disappointed, thinking it wasn't bulky enough to suit its billing. I therefore really liked Rob's conversion as it more closely matched the scale I had always imagined battlewagons to be. You can see in the picture below the difference between a standard battlewagon and one of Rob's upsized creations. 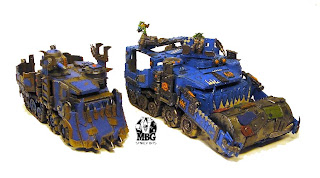 As cool and impressive of a conversion as it is, beginning with only the fourth comment most of the discussion of Rob's article seemed to focus on whether or not this is an egregious example of modeling to gain an unfair advantage within the game. The chief complaint as I understand it was that by expanding the width, the Ork player would benefit from having a larger AV14 frontal armor, thus making it more difficult for the opposing player to get the angles necessary to target the more vulnerable side armor. Rob defended this potential advantage by pointing out that his larger vehicles would conversely suffer from being easier to hit with blast template weapons, perhaps balancing out the gains of a larger front to side ratio. My generally poor generalship precludes me from weighing in on the merits of these arguments other than to say that both sides seem to make legitimate points. What bothers me is that this type of dispute is now unequivocally a part of our hobby, one that was already replete with quibbling and rules lawyering.
Less than a month later this realization really crystalized for me when talking to friends about their experience participating in the various 40k tournaments at AdeptiCon. I heard of a particular controversy involving a counts-as Imperial Guard army that made use of converted Squats and a host of flying counts-as Chimeras. I apologize for the blurriness of my photo but the Chimeras in question are those red and green winged vehicles seen in the picture below. 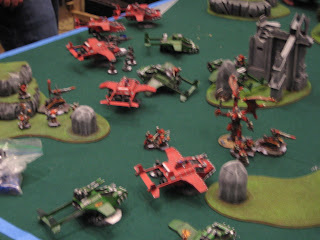 My older brother used to play Squats so when he departed the game I inherited his collection and still have a box of them safely tucked away as evidence of my hoarding problem. I've since maintained a special spot in my heart for those hapless Space Dwarves and therefore always appreciate it when I see someone resurrect them from the dustbin of future-history. I was dismayed to learn that the flying Squats were the center of this debate as to whether or not the organizers should have allowed such a drastic reinterpretation of the Chimera. Apparently the builders of these vehicles had anticipated this possibility and had the foresight to get their conversions approved sometime in advance before their arrival at the convention. This did not however stop the complaints as apparently judges were called over several times by opposing players to argue that these were in some way unfairly designed, accompanied I'm sure by much grumbling. I don't know who was right and the complaints made against them could very well have been valid. Again what troubles me is that this whole scenario suggests a new limit to creative expression within our hobby, at least if one intends on playing in a tournament setting or possibly even at your own FLGS. 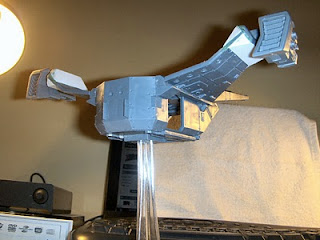 Lastly, check out the above WIP photo of an Imperial Guard Valkyrie conversion dubbed the Copperhead, one of Col. Hessler's current projects that I've been keenly following at his blog, SADOUKAD 16. I think this is an awesome variation of the usual build (and by the way, the newer pics he has since posted are even cooler!), especially as it reminds me in particular of the dropship from the movie Aliens. The very first comment on this photo, however, raised the question of modeling for advantage by noting that people may complain about changes to the LoS from the various weapon locations on this model. Seeing examples like these, I really do not think I am exaggerating this tension between TLoS and innovative or unorthodox approaches to modeling as it would appear to be on other people's minds as well.
I am not in favor of abusive approaches to gaming, this is after all a hobby about playing with little toy soldiers and space men and should be fun for all involved. I still might complain about an obvious attempt to gain an advantage through the nefarious use of glue and plastic, especially if the end product just flat out looks like crap. But if the design is cool and whatever possible advantage conferred is not too over the top as to be silly, I would like to think that I am more likely to see such resourcefulness as an enhancement to my experience rather than an unjust detraction. So then where would I draw the line? My answer to that is essentially that of Supreme Court Justice Stewart Potter's famous statement regarding obscene pornography, that it is hard to define, "but I know it when I see it." So unfortunately I cannot provide anything more than a vague notion of when a conversion crosses the line. With the current rules governing TLoS this is something gamers will have to decide for themselves, and perhaps at the price of a less creative hobby however slight that diminishment might be.
Posted by Papa JJ at 11:17 PM