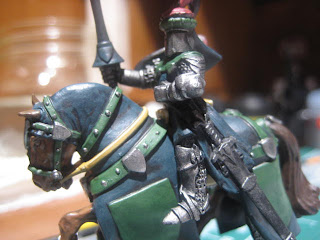 Once again I've demonstrated my inability to predict how long it will take for me to finish a project. A week of distractions and pre-holiday cheer has passed and Sir Cumference is still not yet complete. I am however feeling much better about the project than I had been as expressed in my previous post concerning The Knights of Bal Timorea. Painting the areas of black cloth on the warhorse and knight helped immensely and I'm now happy with how the model is turning out. I'd like to have him mailed out on Monday so that does not leave much wiggle room if my entry is to be in California on time. 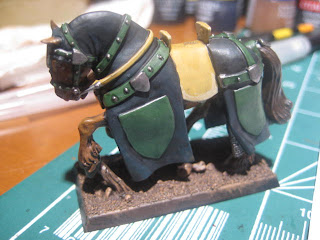 The picture above shows the miniature after the areas of black cloth received a single application of Badab Black. This can be compared to the first picture of this post which was taken just prior to this step. I'm probably going to add Badab Black one more time once everything else is finished as it's still too blue for my liking and I would like to further darken its appearance. Really though from a couple feet away the "black" looks fine, but I think it needs to be darker. Here's another look at the areas I'm talking about, both before and after washing. 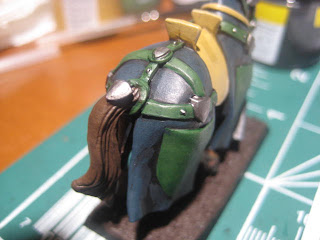 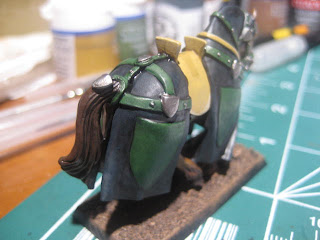 after
There's not much left to do on this miniature with the only big challenge left to tackle being the heraldry. I have an idea of what I want the design to be and have started to work out how I will go about painting it. My goal is to simplify the process enough for me to be able to replicate the heraldry with some modicum of consistency. I'll have to paint it five or six times on this Bretonnian knight so hopefully it's an easy enough design that I've chosen. Freehand painting has never been a strength of mine so no doubt this is going to be lots of fun. :)
Alright, time to get at it. I hope life is treating all of you very well, take care!
Posted by Papa JJ at 10:10 PM