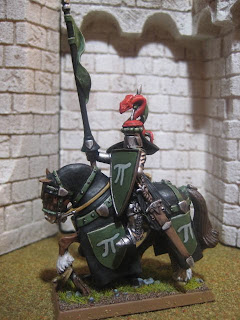 I am happy to report Sir Cumference has finally begun his long journey to the land of California. Safe travels, friend! I finished painting him a couple of nights ago but was not able to get him in the mail until earlier today so I'm keeping my fingers crossed that he arrives on time. Seems my original confidence that I'd finish with plenty of time to spare was rather unwarranted. I'll never learn, will I?
From beginning to end this project was a blast and I'm really happy I decided to participate in The Knights of Bal Timorea. Despite the misgivings I had along the way about the color scheme and concept I had chosen, I'm now quite pleased with my contribution to the group. There are certainly things I wish I could have done better but there are as well some parts of the mini that turned out much better than I had hoped. Also I learned at least a few new techniques that should be helpful in the future so I'd say this was a success. Hooray! 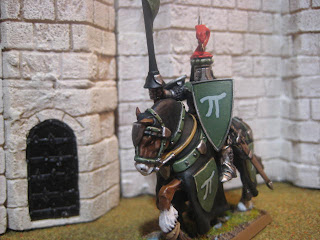 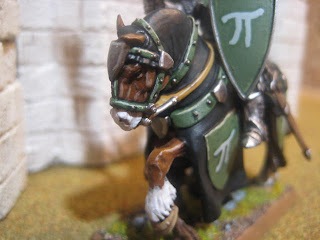 I mentioned back in Part 1 of this series that my inspiration for Sir Cumference was the villainous black knight of the same name seen in the 1946 cartoon, A Knight for a Day. This is the reason why I went with a predominantly black color scheme. I knew right away that I wanted his heraldry to be the letter pi but there were a number of variants that I had considered. Ultimately I decided to keep it as simple as possible knowing even that would be challenge enough for me. My aim with the green background for this heraldry was to be reminiscent of a chalkboard in math class upon which the symbol has been written. I hoped the black would reinforce this Old School Chalkboard feeling and compliment the simple aesthetic I had in mind for the miniature. 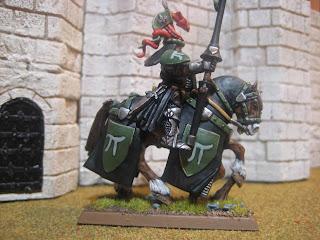 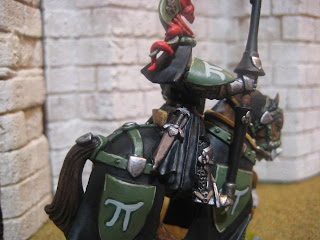 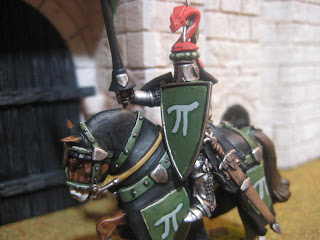 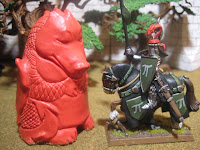 I decided to go with red for the helmet's dragon crest because I thought the extra bit of color would be nice since the rest of the model is quite dark overall. Also at one point my goal was to have Sir Cumference finished by Christmas so the red and green helmet seemed at the time appropriately festive. My final reason for choosing to paint the dragon red is that amongst the knickknacks on my painting desk is this little fellow seen to the left whom I picked up decades ago during a family vacation. I thought it would be neat to pay respect to him as one of my longtime painting buddies and to incorporate a little more of myself into the project.
Like I said I'm really happy with how my miniature turned out and look forward to seeing him ranked up with the rest of the entries. That being said I am now a little sad to let him go, though I know I must as it is his destiny. It is the journey for which he was born. 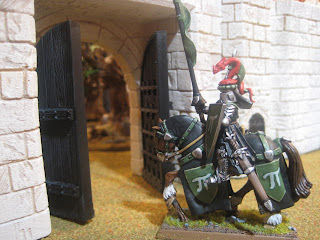 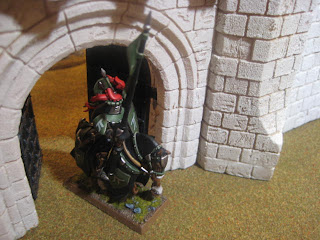 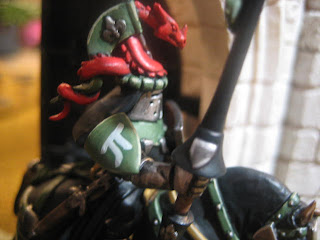 And so with that Sir Cumference and his faithful steed, the warhorse Diameter, set off for distant lands in search of glory. Happy questing, brave knight. Farewell!
Posted by Papa JJ at 11:46 PM