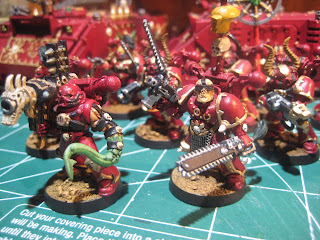 I finally realized the other night that there's no way I'm going to have enough time before Adepticon to paint a new force for the Combat Patrol event (rules can be found here but all pretty standard I think). I'm fairly confident getting my Dark Elves ready by then will take as much time as I can make available. Therefore I'm reluctantly putting aside my idea of painting a new couple of Raptors Legion squads for Combat Patrol and instead have reviewed my other options.
While my Necrons would require absolutely no work in order to be ready, I'm not terribly interested in playing them. It's the same situation for my Tyranids although I might take another look at them at some point just to try out potential lists. Imperial Guard would be fun but require much too much painting for consideration. My very old Orks might work alright but I'd have a very limited selection from which to choose. This means the assignment for the Combat Patrol mission falls to my Chaos Space Marines, the Beasts of Annihilation. All I'd need to do is paint seahorse chapter badges for 15 or so marines and one or two big seahorses for the Rhinos, plus some touchups here and there, and they would be done.
I still haven't gone back to work on this army after finally deciding last summer on a design for their chapter symbol, a little yellow seahorse. It was now more than ten years ago when I first began working on these Chaos Marines and so perhaps it will be the event at Adepticon that at last motivates me to finish such few details that remain. Also due to his group's inability to get organized before the big Team Tournament had sold out, DrGabe of DrGabe's Miniatures will also be playing in the same Combat Patrol event with me. Just in case I find myself matched against my longtime nemesis, I would enjoy using my Chaos Marines against him just like old times.
Knowing now that it's going to be my Chaos Space Marines, I've been working on some potential army lists I could use. It's been a struggle trying to hammer out something I like, but given the nature of the event, I'm not terribly worried about the effectiveness of my "army." Perhaps I'm mistaken but I don't see how you can take too seriously 400 point games of Combat Patrol. Sure I want to do as well as I can but I'm just looking for some fun rolling dice while possibly dealing with an Adepti-style hangover from the night before. With that understanding of my goals and expectations, here is the first set of lists I'm considering: 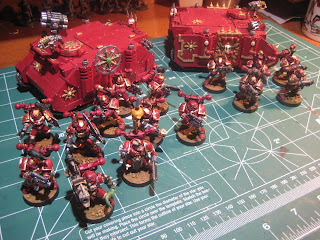