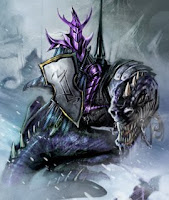 I checked in on the website for AdeptiCon earlier tonight and saw that it kicks off only 77 days from now. Allowing for travel time that leaves me with right around ten weeks to prepare for the events in which I'm registered to participate. The first morning of the con I'm playing in the 1000 point, four round Warhammer Fantasy: It's How You Use It tournament for which I plan on assembling and painting a new Dark Elf army. This is one of the events I'm most looking forward to and has sparked a renewed enthusiasm for the game that I haven't felt in quite a long time. Therefore tonight I want to begin the chronicle of my experiences with this army by discussing how I came to choose the Dark Elves and what it is about collecting them that appeals to me.
Some of you may remember when 8th edition was released last summer that I was very excited about returning to the fantasy game after an absence from it of several years. I'd drifted away from the game and, despite several attempt at getting involved again with various armies, ended up sitting on the sidelines through the entire duration of the previous edition of WHFB. With the game set to undergo what promised to be a thorough overhaul, the launch of 8th edition seemed like an ideal time to start playing again. At that point I wanted to collect a Bretonnian army but struggled with the army book and decided it was just not a good fit for me. Thus ended my brief allegiance to Bretonnia and with it my hopes for a triumphant return to Warhammer Fantasy, at least for the time being.
Feeling somewhat stung by this I didn't think much more about WHFB until preregistration for AdeptiCon 2011 began last October. Described as being particularly suitable for new players, the 1000 point Warhammer tournament seemed perfect for me and as a half-day event would still leave plenty of time for hobby seminars. Wunderbar! As I had hoped it would, signing up to play in this little tournament has given me the motivation I needed to revisit my choice in army and have another go at adding WHFB back to my hobby rotation.

Before finally choosing to play Dark Elves, I had narrowed the finalists down to either them, Orcs and Goblins, a skink-themed Lizardmen army, or my old standby, the Dwarfs. I read through the background sections for each army book and dutifully ogled all the pretty miniatures, but unlike when I selected the Bretonnians, this time to help decide which army to collect I set about making list after list for each of the contenders. I wanted to be sure that whichever army I chose would be one that offers a wide variety of styles of play, a quality that I felt was lacking from my experience working with the Bretonnian army book. Although my short term goal is to have 1000 points ready in time for AdeptiCon, ideally what I'm looking for is an army to which I can commit for the long haul.
Orcs & Goblins were eliminated because I expect to be pressed as it is getting the initial 1000 point army painted in time and thus picking a horde type of army seemed like an obvious bad call for me. Plus it's possible there will be a new O&G book coming out soon and this introduces more uncertainty than I'm presently willing to accept given the circumstances. Next I considered Dwarfs because building an updated army to replace my old collection of beards wearing armor has been on my hobby to-do list for a scandalously long time. Also my familiarity with Dwarfs seemed like it could simplify some of the learning process I will face with 8th edition and would allow me to start off already within a comfort zone of sorts. I decided against them however largely due to this familiarity. I feel like I'm starting WHFB fresh all over again and want to try out new approaches to the game than what I've done before. Therefore going right back to one of my primary armies from the past ceased to interest me once I thought about this and I moved on.
That means it came down to Dark Elves vs. the Lizardmen. The latter of the two offers so much of what I'm looking for in an army that it was a very close decision choosing between them. The strongest lure I felt for the Lizardmen came from what I consider to be one of the greatest Games Workshop kits of all time, the mighty Stegadon! This beautiful chunk of plastic is by itself ample reason to start a Lizardmen army and was likely the main cause of my prolonged indecision. Eventually I decided the skink-based army that I wanted to play, focused on skirmishing light troops backed by Salamanders, Terradon Riders and a Stegadon, would not be a good choice for me as an army with which to learn the game. It seems like it would be too tricksy for me to handle while still coming to grips with the basic mechanics and fundamental strategies of the game. Also I do not know if I would want to expand the army beyond its core emphasis on skinks so I thought it best to save this one for a later, more frivolous project.
And so that left the Dark Elves as the victors of my army search. Although it may seem as if this was just through surviving the process of elimination, there was in fact a lot going in their favor from the beginning and only increased their lead the more I thought about it. For starters I think their range of miniatures is, with just a few exceptions, one of the nicest available. Over the past few years I've purchased a modest selection of Dark Elf models just because they looked neat and seemed like they'd be fun to paint, chief among them the much ballyhooed and likewise bemoaned War Hydra. That's not to say the other army choices I considered do not also have their own awesome models. But unlike the others, I have essentially no prior experience painting Dark Elf miniatures which adds to the whole newness vibe that I'm grooving on. I've painted my share of Dwarfs, Orcs, Goblins, and even Lizardmen in the past, but I have previously painted at most perhaps only a half dozen or so Dark Elf models. 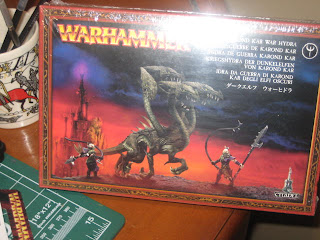 A fire breathing, regenerating, terror causing monster with Thunderstomp... YES PLEASE!
Cool miniatures alone are not enough to sway me however because Games Workshop has us spoiled for choice on that account. Therefore I believe the time I spent working on army lists at a range of point levels was particularly helpful. I quickly came to appreciate the variety of units available to Dark Elf armies and am confident I could add to my collection for a long time to come before exhausting my interest in them. I think it's an impressive mix of heroes and units, including: both cheap and elite infantry, skirmishers, missile troops, fast cavalry, heavy cavalry and chariots, competent magic users, a quality warmachine, and perhaps best of all, a big ugly monster worthy of being the centerpiece for my army. That's pretty much everything I could want and more.
Lastly, I noticed something unusual about the Dark Elves. Although I've at least dabbled in close to every army available at some point or other, it appears as though I've managed to avoid almost entirely the Dark Elves. Not only have I painted just a meager few of their miniatures, but I also have read and absorbed precious little of their fluff and background material prior to this undertaking. Other than the fluff contained in previous versions of their army book I cannot recall having read anything else concerning Dark Elves and their place in the world of Warhammer. As much as I liked the miniatures and their style, the concept for mean elves obsessed with revenge had virtually no appeal for me.

Something clicked though as I was reading through their current army book a couple of months ago when I started this army evaluation process. This time around I was totally hooked by the story of the Druchii and found their history and social dynamics fascinating. It was therefore something of a special bonus when I realized that I have the Malus Darkblade and Malekith novels available to read as I work on my Dark Elf raiders. I don't know if I've ever had the pleasure of reading a Black Library book while at the same time working on the main army featured in the novel. That makes this sort of a unique treat for me and sealed my choice in favor of the Dark Elves once I realized how well this had worked out.
Having gone through all of this and really having taken my time with my decision, I feel confident that the Dark Elves are indeed the right choice for me. I like the painting and collecting opportunities, there seems to be a strong variety of units and army styles with which I can experiment, and the fluff offers for me a new and previously unexplored perspective on the Warhammer world with more than 1800 pages of fiction to read related to my choice of army. Like I suggested before, it's all I had hoped for and more.
So that's the story of how I came to be a Dark Elf player, I do apologize for letting this turn into such a lengthy saga. In my defense however this did cover the past three months of Warhammer Fantasy contemplation in which I've indulged. Now that I'm caught up to the present with my account, I doubt there will be further reason to write at such length anytime soon. I ended up not having much time to begin work on the army this past week so I'm looking forward to diving in this weekend. In the coming days I will discuss things like potential themes for my collection, developing army lists, assembly and painting notes, and so on. For now though I feel exhausted and am quite ready to stop writing.
Therefore goodnight and happy gaming!
Posted by Papa JJ at 11:54 PM