This is going to be a relatively quick post tonight as I am about to begin the assembly of my Dark Elf War Hydra. Based on its reputation I am expecting this to be a frustrating and potentially unpleasant experience. I've heard numerous horror stories about this miniature and am understandably nervous about the modeling challenges it will present. Already in the short life of this project both a Harpy and a Dark Elf Shade have gotten the better of me and drawn blood from my careless fingertips. I therefore fear what might befall me while working on the War Hydra. 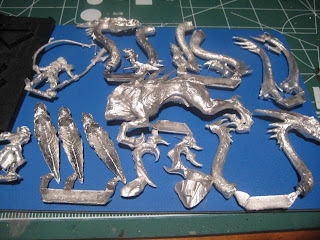 I'm sorry I haven't posted any updates in the last week about my Dark Elves, hobby time has been scarce and I spent what I had assembling the first batch of models. I decided to begin by working on all the metal Dark Elves I have in order to get the most annoying stuff out of the way early. I'll then move on to the plastic guys and hopefully be ready to begin painting by February, giving me about two months to get at least 1000 points painted before Adepticon. It's been sort of a slow start but I'm optimistic things will pick up soon.
So far I've assembled five Shades, the first five out of ten total Harpies, a Sorceress riding a Cold One, and an Assassin as seen in the picture below. All of those except the Shades were among the miniatures I had purchased before ever wanting to collect Dark Elves for WHFB, having planned on using them either for other projects or else purely for the fun of painting them. The Hydra and the remaining five Harpies are the last of the metal minis to be assembled so I'd like to start on the plastic ones by next week. 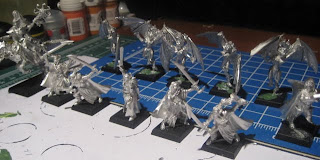 Okay, that's it for tonight's update. If I have some extra time this weekend I'll explain more thoroughly what I have in mind for this army and what I'll be working on over the next few months and beyond. Now though I'm off to fight a Hydra... goodnight!
Posted by Papa JJ at 11:36 PM