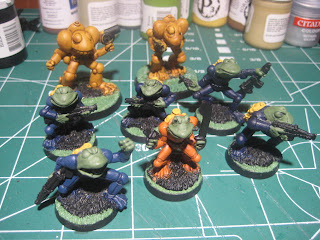 When I started this blog one of the main purposes in doing so was to use it as a way of keeping track of my painting notes. I've had notebooks for this before but have done a poor job in the past of hanging on to them or using them consistently. Since I like to skip around with my projects and always have a number underway at any one time, not keeping up with my notes can become very problematic. Thus my plan to use diceRolla as an online painting notebook was conceived.
Typically with the first WIP post of a new project I would include a complete list of the paints I had used up to that point, broken down for each discrete area of the miniature. As I made further progress these steps would be added and through the magic of the Edit Posts button a fully updated painting guide would gradually be created. (An example of how this ultimately looks once complete can be seen here.) This method provides less than a step-by-step or painting tutorial would but it is enough for me to feel comfortable about leaving a project for a long time without sacrificing consistency in the colors used. And voila... I had a painting notebook!
This system worked well initially but after my unexpected four or five month break from painting last year I neglected to resume this helpful habit. I'd like to say it was just laziness but truthfully I became self-conscious about this practice once I realized how many exceptionally talented painters see my work here. I worried that these "color guides" as I called them would come across as presumptuous or vain if their purpose as being for my own benefit were not understood, so I stopped doing them. I've since come to regret that as I, true to form, failed to take any notes once I started painting again last autumn. In that short amount of time I've already forgotten how I went about painting my nascent Blisstonian 9th army and the currently dormant Rogue Trader crew for Killzone. I'll likely be able to figure those out again but it will require time that would otherwise go to something more productive.
Therefore one of the things I've decided to do with diceRolla this year is return to my former intent of maintaining an online painting notebook. If all goes according to plan, the first WIP post for each new painting project will have a list of colors used, gradually expanding to include every pot of paint touched in the process of working on the miniature. Hopefully this will not be too intrusive as to annoy any veteran painters and perhaps might even prompt suggestions as to how I can improve my painting or choice of colors. And if anyone does in fact find these notes to be in some way helpful to their own hobby, then that will just be a nice bonus.
What follows then is my first color guide of 2011, beginning the year with a selection of Frog Fighters for the game Critter Commandos. Over the coming days I will return to edit this, updating it as I make progress painting these miniatures until completed. This is meant for my benefit but if anyone has questions, please don't hesitate to ask as I'd be happy to help if possible. 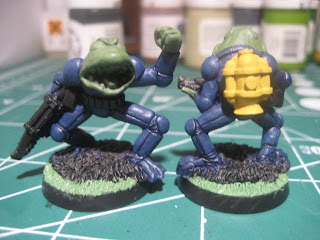 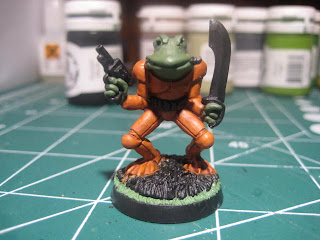 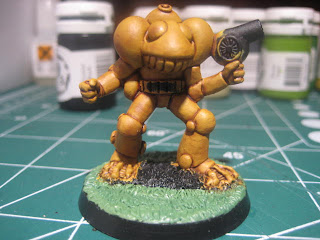 Armored Suit: Iyanden Darksun, Gryphonne Sepia (twice), Iyanden Darksun, Moldy Ochre
Eyes: Gnarls Green
Hairdryer: Mechrite Red
Before I go back to painting these guys tonight I'd just like to note the bases upon which these miniatures now stand. I tried my best to blend them with their original bases and am reasonably satisfied with the results. I am normally very reluctant when it comes to the greenstuff however so even this is an accomplishment of which I am proud. I wasn't sure if I'd bother with bases at all but trying to paint them without anything to hold onto was too much of a hassle. Now that they're properly based, painting my Frog Fighters has proceeded far more comfortably.
As an unanticipated side effect of mounting them on bases appropriate for WH40k, I'm also starting to have thoughts... terrible, heretical thoughts... about what to do with these miniatures once I've finished painting them. It's been many years since I lasted looked at the rules but I remember Critter Commandos as being something of an awful mess as far as game mechanics are concerned. Therefore if I want these miniatures to do anything besides sitting on my shelf I suspect I'll need to look elsewhere for a viable gaming experience.
Hmm... Killzone, perhaps? Someone call the Deathwatch. ;)
Posted by Papa JJ at 11:44 PM