At long last I have finished assembling my Dark Elves. Well, almost... I have about a dozen more Cold One Knight bits left to clean and attach tonight but after that I will have more than 1250 points of Dark Elves built. Phew! Tomorrow if the weather cooperates with me I'll prime the minis and can then finally begin painting. That leaves two weeks to paint as many of the 50 or so models as I can before the tournament begins on the morning of April 1st. Oh and I'll need to travel to the event in Illinois as well so it's really twelve painting days left to go. Noooooo problem. 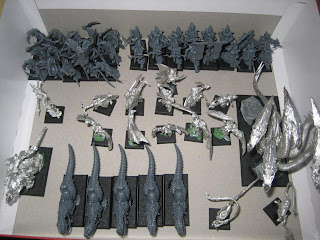 Considering last year I painted approximately 30 miniatures total, the prospects of showing up the morning of the 1st with a fully painted army seems to me rather unlikely. I am however very keen on finding out just what I can do in the time remaining. The tournament has a three-color minimum painting standard which I suppose must be my first concern. I'm not used to this sort of approach to painting but I think it could be helpful to shake things up a bit and deviate from my usual routine. Regardless it's worth a shot at the very least as I am still quite eager to play in the tournament and this should make for an interesting experiment.
My schedule at AdeptiCon has changed however in the last several days as I will no longer be playing in the 40k Combat Patrol event on Saturday morning. Instead I have been recruited by a desperate group of gamers in need of a fourth for the WH40k Team Tournament, billed by AdeptiCon as their "flagship" event, whatever that means. What it means to me is getting to spend the entire day rolling dice with DrGabe and a couple other pals from the Midwest. They're taking care of the armies that we'll be using, the display board, and the team beverages so all I have to do really is show up prepared to make a long series of what will surely be poor command decisions. Neat! I was scheduled to attend several seminars that afternoon but I'm more excited about playing in the team tournament after watching some of the action last year.

With little time to prepare the guys have been scrambling to sort out what type of army lists we can play in the tournament and what projects or details would remain depending on these choices. I have been fortunately spared from any such responsibilities and will continue to put whatever time I have toward working on my Dark Elves. Now that the opportunity for actual painting has arrived, I do hope to post more frequent updates as we get closer to the start of AdeptiCon. That's it for now though as I need to finish building those Cold One Knights. Happy gaming, everyone!
Posted by Papa JJ at 11:49 PM