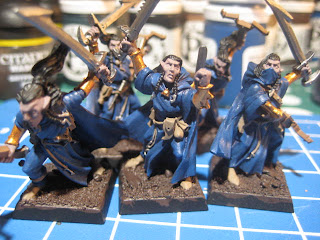 Last night I began work on the Dark Elf Crossbowmen after having finished the Shades earlier in the day. Of course finished at this point is a very relative state of being, meaning only that I now think they're good enough to hit the tabletop but will still need more time later on for highlighting, washing, and picking out additional details. Likewise for the Harpies which I tidied somewhat and added a few more touches since my previous update. The Sorceress received more attention than the others however as she is currently my army's only Character model, and therefore I felt the extra time spent on her was warranted. She's not fully done either but is very close and will hopefully be the miniature that gets looked at most carefully at the tournament. 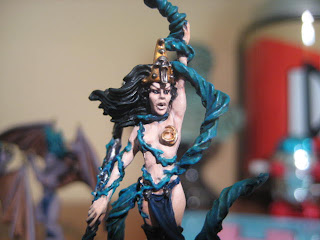 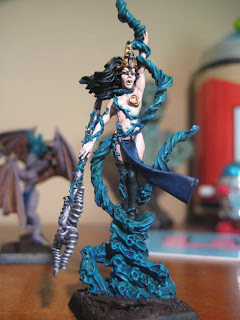 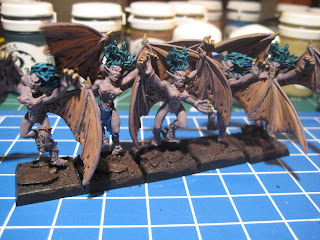 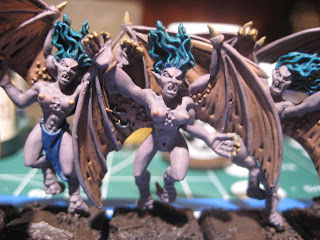 It has been quite tempting to spend more time painting the Shades so I have to keep reminding myself to resist the lure of Citadel Washes and simply move on to the step. Nonetheless I repeatedly found myself thinking, "Oh, how easy it would be to just go over things with some Devlan Mud," or, "A quick highlight would do wonders right there, that wouldn't take long...." But with plently left to paint I must press on. These are some of my favorites of the Dark Elf models that I've worked on so far and I definitely look forward to seeing them complete. 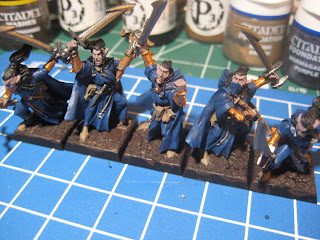 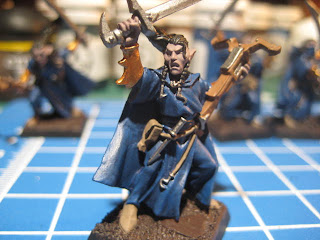 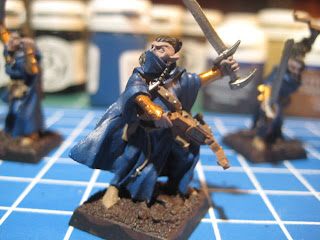 I only just started in on the following unit of Crossbowmen before pausing for pictures so there's not much to look at yet. I did however continue painting last night and was able to get the base coat of blue onto the rest of their armor and clothing. Out of consideration for my post-AdeptiCon plans for the army I'm working on 16 of them even though I will only be using 12 in the tournament. My normal comfort zone for painting is usually not more than five miniatures at a time so this unit presents another interesting change to my usual habits. 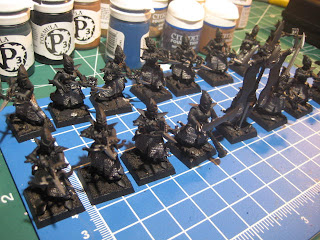 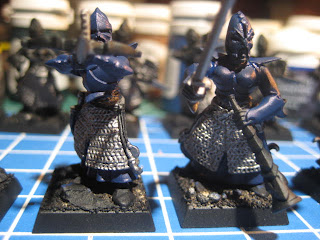 Eventually all of the armor plates on these guys will be the same greenish-tourquoise color as seen with the Harpies' hair and the column of magic upon which the Sorceress is perched, but with a glossy coat to hopefully make them appear like lacquered metal. Since I skipped painting any test models when choosing a color scheme, I am not sure how the end result will look although I do have a good sense of what I'm aiming for at least. Presently I am content for them to remain blue to allow me to hustle along to other areas in need of paint, bearing in mind the modest requirements I face in order to play in the tournament.
Three color minimum... three color minimum... three color minimum. :)
Speaking of which, it's almost time I resumed my painting. Goodbye for now!
Posted by Papa JJ at 1:16 PM