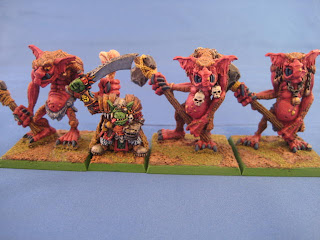 Since the new Orcs and Goblins book was just released this weekend, I thought it would be a good time to take a look at one of my old O&G units, a mob of Stone Trolls. I don't remember exactly when I painted these but suspect it was around the mid to late 1990s. Along with being influenced by the more colorful period of Games Workshop's stylistic history, apparently I was also in a rather experimental mood when painting them. I wanted to do something different from the norm for Stone Trolls, which I'd say I achieved handily, though whether the results were worth it or not I leave for you to judge. While I am fond of these miniatures in a nostalgic way, my assessment of them leans more toward hideous.... 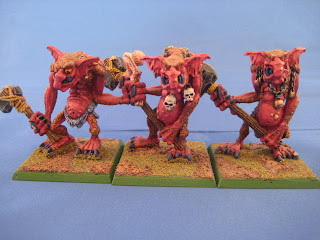 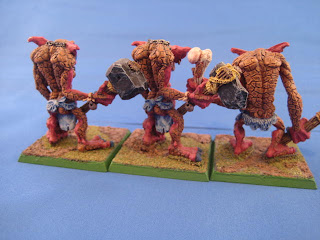 Now for a closer look at the individual trolls... yikes! I do however like those bases right down to the classic Goblin Green edges. 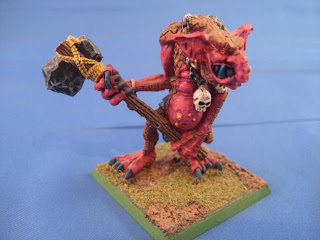 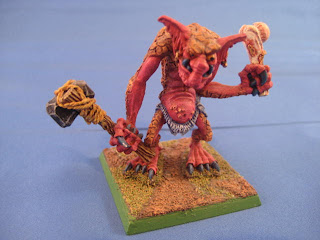 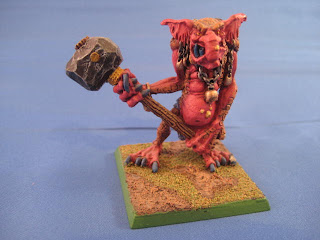 This mob of Stone Trolls is lead by an Orc Big Boss but I'm not sure if that would still be allowed by today's rules. I admit to really liking this miniature and think it's a good example of the outright silliness that used to be fairly common in GW designs at the time. 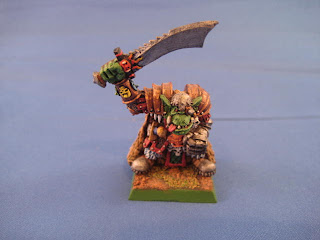 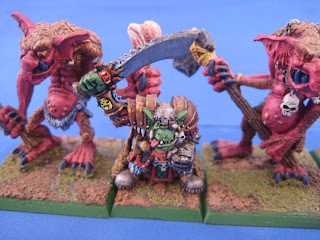 So that's it for this look at some of my old miniatures, I hope you enjoyed it. I really admire creative and innovative color schemes but there is a certain risk when straying from the tried and tested. Not every experiment can be a success, after all. Nonetheless I do like these trolls but if I had to paint them over again I would likely go with a more conventional approach. I would not, however, change a thing on the Big Boss as I especially like the brightly colored skulls on his wrist and orange belt buckle. The sides of his bracelet which you can't see in these pictures have a green skull facing to the right and a red one looking back. Taste the rainbow!
As evidenced by these pictures, this was my first attempt at using a lightbox photo studio thing. Along with getting some brighter lights there's obviously still much for me to learn regarding miniatures photography. It is my good fortune then that just earlier today I saw Nesbet of Nesbet Miniatures has posted what looks to be a very helpful tutorial on this exact subject. Part 1 of the tutorial even has instructions for making your own portable lightbox and photo studio. Awesome! Part 2 looks at correcting common mistakes made when photographing miniatures, and Part 3 is about photo editing. Good stuff if you're interested in that sort of thing... thanks, Nesbet!
Posted by Papa JJ at 10:53 PM