The Fate of Luca Brasi 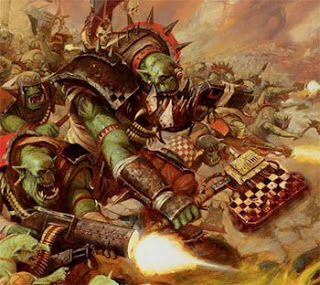 Curse you Games Workshop!! Ahhh! I feel like that dude in The Godfather, "Just when I think I'm out, they keep pulling me back in!" My goal was to sell most of my GW stuff but just like so many times before I find myself being drawn back once again. Damn. It was thinking about that blasted Stompa and reading up on the new 40k expansion, Planetstrike, that got my imagination drifting back to it. Also my brother has suggested a couple of times recently that we get a game of 40k together, something in the past I would have never snubbed. I therefore now have another GW mail-order shipment on the way and I haven't yet even posted one thing onto eBay.

I do still plan on selling pretty much everything I had mentioned before, I just haven't had the time to get the lots organized and pictures taken. In the meantime I have been dusting off my 40k codecies and looking through stacks of old issues of White Dwarf for the 40k articles that I had largely ignored. Qutie a few months ago I had finally said, "Enough! No more 40k ever!" I don't know how many times I've done this before, but this time I thought I really meant it. Maybe it will help being able to go back and forth between historical and Warhammer project so as to protect against getting burned out with either one. I'm not suggesting that I am burned out with my HYW: English, I just have some serious cleaning that I need to do before I can get back to painting. I am however thinking about having some Orks and Marines going at the same time... we'll see. At a very minimum I would like to paint the starter armies from Assault on Black Reach and then go from there. If I can eliminate much of the stuff I've been hanging onto for years and years, then I don't expect that I would mind so much having a few extra painting projects to compete for my attention so long as they are all one's that will be eventually be painted.
Posted by Papa JJ at 8:24 PM