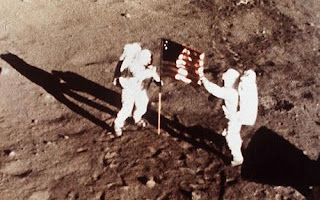 Today is the 40th anniversary of the Apollo 11 Moon landing and the first time humanity has ever set foot on ground not of this Earth. Hmmm, considering that much of the moon's actual mass is probably of terrestrial origin this isn't entirely true but you know what I mean. From 1969 to 1972 the Apollo program made six total trips to the Moon. I was born in 1977 and so for my entire experience of life it has been a fact that humans can travel in space and visit other celestial bodies. Thinking about that even today blows my mind... I appreciate the accomplishment and am not jaded with regards to the challenges involved in sustaining life in such a hostile environment. But as a fan of NASA and space exploration in general it truly pains me to see the embarrassing state of the current American space program.

I grew up with the space shuttle and have seen essentially no progress from them for the full extent of my lifespan. The Hubble telescope was cool but it's going to be gone soon, and meanwhile the International Space Station continues to suck up huge amounts of the Agency's resources to achieve what? Just a science lab floating around in space! It's such a lame goal that it is completely understandable to me why people don't care anymore. The public is not interested in NASA, though I think there is still a general interest in space exploration.

So what went wrong? My belief is that NASA became just like every other Federal agency. During the early years of the American space race the agencies responsible, primarily the USAF and then later NASA, were home to not just big-thinking scientists and engineers but also daredevils and adventurers as well. The very spirit of exploration is that of adventure and the embracing of risk. But over time NASA became another enclave of career-minded bureaucrats and politicized scientists. Rather than aiming to achieve something great, it seems that NASA at least as far back as the Challenger explosion has simply sought to justify its own budget. Risk aversion and the desire to not screw up have killed that sense of adventure and Americans know it.

There is no reason why we have not already landed on Mars than a simple unwillingness to do it. The technology to do so exists but the people in charge see to it that instead we plan out thirty years of remote exploration by means of satellites and robots, after which maybe they'll be willing to begin taking steps towards landing humans on our planetary neighbor. Everything gets simulated and tested to ad nauseum with the goal of exposing the people involved to the least chance of coming to harm, both to the physical body as well as their careers. But that just seems to me to be so anathema to the spirit of exploration that it becomes small-minded and petty. To make the space program, all the President would have to do is come out and say that America will have colonists living on the moon by 2020, and NASA will make it happen. And if they won't do it, I will.
Posted by Papa JJ at 9:39 PM