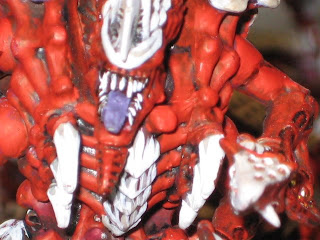 Since it looks like I'm getting back to 40k for the time being, I thought it would be appropriate to introduce you to the last army that I had been using with 4th edition rules a couple of years ago. Please say hello to Hive Fleet Hydra, a 2000 point Tyranids army. Since these are the guys any future armies will most likely be tested against, I thought it might be useful for me to post their army list.

The army totals to exactly 2000 points, although if conditions allow I also like to give the genestealers the Scuttlers upgrade (18 points per unit) and Flesh Hooks (4 points) to the Hive Tyrant with the Devourers. Of course one of the really nice things about using the Nids is the amount of customization possible so when extra points are available there's always numerous useful options. With an opponent who is fairly open minded to the WYSIWYG rule, I find it a lot of fun to try out different bio-morph combinations as often as I can. Having said that, if I just need a 2000 point list to take on all comers, then the one above is what I'd use.

As I have noted before with playing games of 40k in general, I feel as if I really didn't get that many chances to field this army in a competitive environment using the previous set of rules. I am thankful though that the current version of Codex: Tyranids is compatible with the updated core rules as I am now really curious as to how well Hive Fleet Hydra will fare in 5th Edition. I've got a sense that the game's new reliance on true line-of-sight shooting could significantly change the way the army performs, though I have no idea whether it will be a net benefit or loss for this particular army list. For a Tyranid army it has a decent amount of shooting but almost all of it short to medium ranged, and with only a single Venom Cannon able to reach targets more than 18 inches away. Therefore I suspect it should be possible to use the new LOS rules to more effectively hide my units behind cover without having to lose too much of my own firepower in the return. Only in battle, however, will this become clear.
Posted by Papa JJ at 12:18 AM