It's official, I'm going to AdeptiCon! Five months from now I will once again load up the diceRollamobile and hit the road for charming Lombard, Illinois. I had a great time last year and am very happy to be going back. Three days of rolling dice and hobby seminars, hanging out with old friends and new, and most important of all... celebrities! 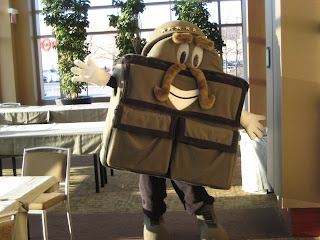 "See ya next year, doofus!"
At the last AdeptiCon I filled my schedule entirely with hobby seminars and ended up spending around thirty hours in hotel conference rooms, painting miniatures and learning new tricks. (A lengthy review of these seminars can be found here, many of the same ones are being offered again in 2011.) I therefore initially thought I would only take one or two more of these and focus mainly on the gaming opportunities. Of course this plan did not last long into my review of the pre-registration catalogue as I spotted lots of classes that sounded interesting and helpful. So for 2011 I'm doing close to a fifty-fifty split between hobby seminars and playing games. I also cautioned myself to leave more room for free time but that didn't happen either. Whatever, it's going to be another busy weekend of AdeptiFun.
Each day I'll have one gaming event in the morning going into the afternoon, to then be followed by seminars lasting into the night. I like the idea of unwinding with some classroom time after a few hard-fought hours in the tabletop trenches and feel like I've worked out a good schedule that nicely balances my interests. Also I've heard these shorter tournaments are a bit more relaxed than the big, all-day or even multi-day competitions, so I'm optimistic that the ones I'm playing in will be better suited to my usual gaming disposition.

Friday I start out at 11am with the 1000 point Warhammer Fantasy "It's How You Use It" tournament. I don't have an army picked out and it's been more than four years since I last played Warhammer Fantasy with regularity or gave it any serious attention. I therefore have some significant preparation work to do for this event and I'm psyched about the challenge this presents. Unlike the Privateer Press games, which I did briefly consider for AdeptiCon, I am at least comfortable with Warhammer Fantasy's fundamental game mechanics after years of playing previous editions and think I can get up to speed with the current rules by April. Or it could all go horribly wrong. Either way it should at least be an enjoyable journey.
Saturday morning at 9am I'm registered to play in the first of the day's WH40k: Combat Patrol sessions. Again I haven't decided what type of force I'll use for these games. I have plenty already painted from which I can choose though I would prefer to make something new specifically for the event. It's nice to know that if I get crunched for time I can field something ready to go from one of my usual armies, but I want that to be only as a last resort. I'm leaning toward either mechanized veteran Praetorian IG or scrap huntin' Orks, but I'm really open to anything that seems like fun.
Lastly I'll close out the weekend with Spec Ops: Killzone on Sunday at 11:30 am. I've become quite taken with Big Jim's skirmish rules for 40k and am thus particularly excited to play in this event at AdeptiCon. Thanks to the Killzone Blitz earlier this month my Rogue Trader team isn't far off from being complete and is my top choice to use in these games. I'm going to finish painting them and will then begin field testing to determine which of the Rogue Trader's entourage make the final cut. Playing on the awesome boards b.smoove of A Gentleman's Ones has been assembling for this event should make for a fittingly dramatic finale to my weekend hobby binge.
And so those are the gaming events for which I've registered. There's a lot for me to get done before April, especially since I now might be moving to North Carolina as early as February, which I'm sure would help tremendously with the requisite painting and practice games. Along with the 40k and Fantasy stuff mentioned above I also have plans for display boards, a Blood Bowl team for some possible extracurricular gaming, and even an entry or two for the Rogue Demon painting competition. I'm really happy with the variety of projects which I'll be working on over the coming months in preparation for this and will be sure to post updates on my progress.
Alright, that's it. I hope everyone has a great weekend, bye!
Posted by Papa JJ at 11:20 PM