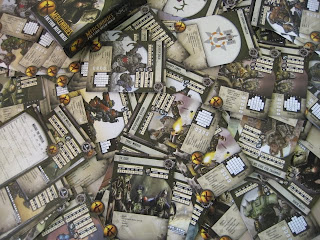 This weekend I bought a Mercenaries MkII Faction Deck only to discover that it is missing all the particular stat cards for which I made this purchase. In place of the expected Talion Charter cards there is instead a surplus of Rhulic duplicates. I assume someone bought two decks and swapped out the unwanted dwarves to gain an extra set of pirate cards, then returned the tampered deck for a refund. Sneaky git.
I try not to be cynical but this seems unlikely to have been due to faulty packaging or a manufacturing error. I didn't realize until much later that the box was closed with two pieces of clear tape which should have tipped me off that something was amiss. I had been in a hurry to get out of there, however, as the store gives me the creeps and therefore I did not look closely at what I had picked out. It was only when I went to open the deck the next day that I first noticed anything wrong. Caveat emptor, indeed.
Despite being on the wrong end of these shenanigans, I am kind of amused that the apparent targets of this scam were the pirate themed stat cards. It seems fitting at least. This experience isn't even that surprising based on the store's history of unmitigated disappointment. Really this just strengthens my resolve to henceforth patronize it as little as possible. The store is more than an hour's drive from home, offers no discount (but sometimes even charges above the MSRP!), and leaves me with an overall icky feeling. So much for buying locally, I'll shop online. 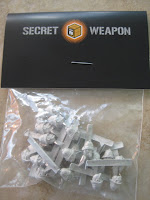 Now I don't want this post to be entirely negative so for some balance I also want to briefly report on some recent positive shopping experiences. First up are these great pith-helmet head swaps from Secret Weapon Miniatures that I received in the mail today. Seeing them in person gives me a whole new appreciation for the awesome sculpting job done by Col.Gravis of Col.Gravis' Praetorian Imperial Guard. I ordered enough heads to make a minimum sized Praetorian platoon but I currently don't have any plans on going beyond that. I just thought it'd be a fun side project to tinker with and add to the painting wait list. Also I think it's great that more people are entering the market sculpting and casting add-on and parts-swap bits like these heads. The world needs more bits, so I really do like supporting commercial endeavors like this. Good work guys! 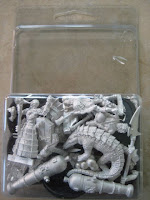 The other thing I'm happy to report about is the swift arrival of a batch of miniatures ordered from Privateer Press. No surprises here, I simply appreciate being able to purchase bits and individual models otherwise only available in their box sets. I wish Games Workshop had not eliminated their own bits service and continue to hope that someday it will return. Does anyone remember an official GW explanation for why they discontinued bits sales? No matter, I suppose. It doesn't seem to have affected their success too adversely.
Alright, enough of this. Sorry about all the whining and the rather dismal photos. I've been getting in a little hobby time here and there so I should have better things to talk about soon. Also I'm gathering together the last elements needed for the next diceRolla giveaway so I'll have details on that posted soon. Bye!
Posted by Papa JJ at 10:10 PM