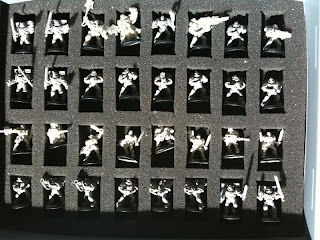 The miniatures are very basic Marines largely without adornment which is okay as my aim is to get this army painted quickly, whatever that means. I ordered a sheet of Raptors transfers from Forge World to save me from the embarrassment of trying to freehand the chapter badge. In the meantime I'll add these guys to the painting list and see what happens. I don't know anything about the chapter other than what's on Lexicanun (Raptors, Badab War) but I doubt any of what's assembled will be inappropriate for this army. I mainly like the color scheme for the Raptors and anticipate it being fairly straightforward to paint which would be nice.
It's been an edition or two of Codex: Space Marines since I last played vanilla marines so this should be an interesting challenge learning how to make use of what the current book can do. It does feel nice though to have finally figured out what I want to do with these miniatures after hanging onto them for so long. Also I really like the background for the Badab War so I'm excited about having found an aspect of it to add to my own hobby schemes. Neat!
Okay, that's it for now. I'm still plugging away at those trees so back to the painting for me. I hope everyone had a great weekend, bye!
Posted by Papa JJ at 11:46 PM