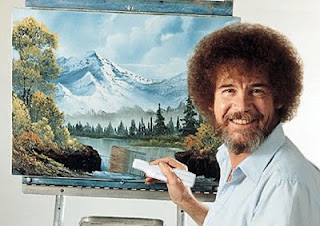 Wow, where did the week go? These have been some busy days for me without as much hobby time as I'd anticipated. I've started painting the first three of my Citadel Woods and have managed to make slow but steady progress on them. With many army projects needing my attention, and now with a deadline to finish a few in time for AdeptiCon, painting terrain seemed like the obvious choice for this week's focus. Good call, Jason.
I had originally hoped to finish these kits by the end of tonight but I realized a few days ago that such would be unlikely. Nonetheless I'm satisfied with what I've been able to get done and think it will only be a couple more days until completion. Well... so long as my supply of washes does not run out first, that is. My usual camera is currently jet-setting about the country with my wife as she attends a series of conferences, and I'm too intimidated to try out her fancier camera for the first time without proper supervision. I therefore present to you bad iPhone photos of partially painted and unassembled terrain... hooray! 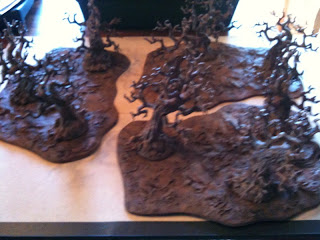 Is this perhaps the worst iPhone photo ever taken? I think so. Those blurry, undifferentiated blobs of brown are actually nine trees and their three bases. At this point they have been primed black, then sprayed again with Leather Brown colored primer from The Army Painter, followed by a thorough washing of Devlan Mud. After drybrushing the trees, roots, and logs I will next paint the stones and add flock to match my gameboard. There are some details to pick out like skulls and whatnot but otherwise that should be it. 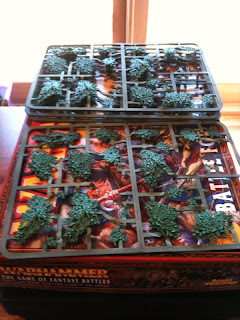 Now for the leaves. Because it took me so long just to clean off the seventeen miles or so of mold lines from the trees and branches that when it came time for the leaves, I simply said "never mind" and decided not to bother with them. This is a very rare concession for me as I am normally diligent when preparing my minis, but I really don't mind slacking in this case. I'll clean up the worst offenders once I start clipping the pieces off the sprue but I'm not going to worry about the rest. You are therefore forewarned should you happen to see any leafy mold lines in future pictures that get posted here. Thank you but there's no need to point out my laziness. I know the mold lines are there and I am at peace with them. 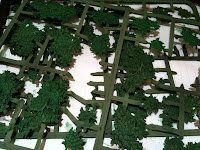 Another sacrifice I have made for the sake of expedience concerns my choice of colors and my overall approach to these pieces. Originally I had thought I would paint and highlight all the leaves individually and mix in a variety of shades of green like you see on the trees in White Dwarf. When it came time to actually start painting them, however, I realized how insanely stupid that would be if I ever wanted to actually finish these and move on to something else. So instead I primed 'em black and then blasted away with Army Green colored primer, then washed liberally with Thraka Green. In these pictures I've also almost finished drybrushing the leaves with Iosan Green (P3) and will follow up with one more light drybrushing to pick out the more prominent edges. After that I'll just need to paint the little branches poking through the canopy and I can then start snipping and gluing. 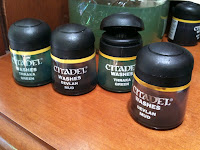 As mentioned I am running low on the two washes I've used so far. The pots you see to the left were new and filled completely just this past Thursday night when I opened them for use on these woods. I believe I should have enough Devlan Mud to complete the job but it's going to be close. Otherwise they're all now empty. I've been feeling increasingly ill and worn out beginning yesterday so I'm grateful to be working on a relatively simple painting project. Thank goodness for my happy little trees... time for me to paint some more leaves!
Posted by Papa JJ at 11:32 PM