After a few more setbacks over the last week concerning my nascent Chaos Daemons army, I've decided to put that 40k project aside for now and return to more familiar ground. For whatever reason I couldn't get my Slaaneshi mojo working so instead I have switched back to the Blisstonian 9th, my Simpsons-inspired Imperial Guard regiment. Also at this point I would much rather spend my time painting than building another army. I still want to do the Daemon thing but that can wait as it is not something I want to rush or do half-heartedly. Thus onto my beloved Blisstonia... 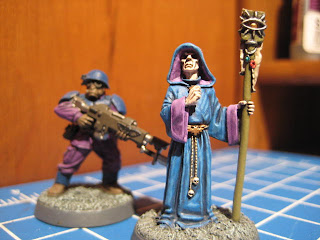 When I was last working on these guys I had become bogged down with the very first penal squad of the army. I may have to rethink their color scheme or at least change my approach to painting it as I remember those Guardsmen not being very much fun. In the meantime however I am going to begin by painting Techpriest Smithers and his squad of servitors, the Drones of Sector 7G. This seems appropriate too in that they were the first unit I included when developing the theme for this army. I'd also always planned on painting them in a different set of colors from the rest of the army, so that way I can work on them without knowing exactly how I will proceed with the main portion of the Blisstonian 9th. 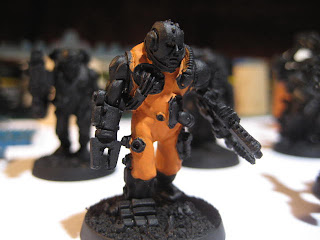 As evidenced by the extremely early WIP photo seen above, I only sat down to begin painting these servitors a few minutes ago. Therefore I am eager to get back to it while I still have time this evening. Hopefully I can get more done on my Blisstonians than I did with the Slaaneshi daemons before I once again change directions. Despite how fickle I can be, that still shouldn't be too hard considering how little progress I actually made on the Chaos Dameons. Hmm, maybe Tzeentch would have better suited my hobby temperament after all.
Happy painting and gaming!
Posted by Papa JJ at 11:56 PM