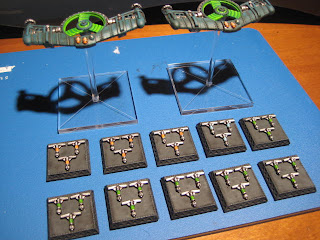 Okay, they're not completely 100% finished yet. I still need to spray them with varnish but otherwise I've now painted the Ptolemy Class Bombers and the Tiny Flyer tokens that come in the Covenant of Antarctica naval box. The bombers look a lot like they did the last time I showed them on the blog, having only added highlights to the metal areas, the orange canopies and windows, and the glowing green rotor blades. It's all pretty subtle though so the changes might not be noticeable in these pictures. I love these models and am quite happy with how they tuned out. 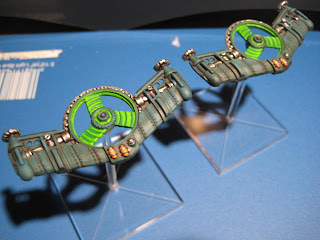 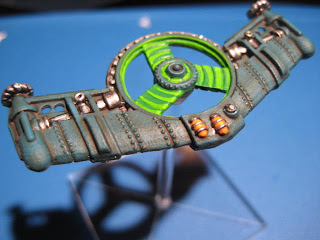 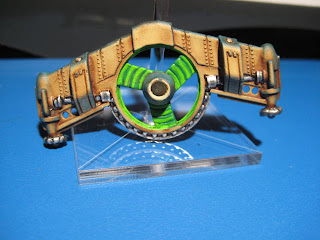 The giggle-inducing CoA Tiny Flyer tokens however look fairly different from how they did last night. I took some good advice and pressed on with my plan, painting through my momentary hobby panic. I am thankful that I did as these Tiny Flyers ended up looking nicer than I had expected, likely better than they would have had I not botched my original color scheme. As for the glowing coil that makes up each drone's midsection, I opted in favor of expedience and decided not to repaint anything, instead leaving them as a mix of colors to denote what type of tokens they represent. 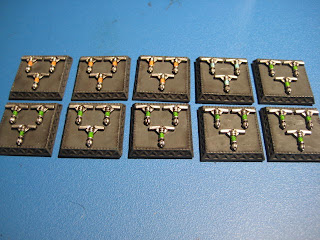 I have to say that the green ones are still my favorites of the bunch. I agree that having them all the same glowing green color would help to visually tie together everything in my fleet, but for now I am willing to forego that level of consistency in appearance. I may want to paint all my future drones with green coils but I can accept this first batch as they are. Also this way it might be easier for me to keep straight the different types of flyers as I learn the game. Nonetheless at this point I think having all of them with green coils and squadron markings on the wings or wingtips would look the best. I'll save that however for another day as I would rather continue on to the next part of this project. 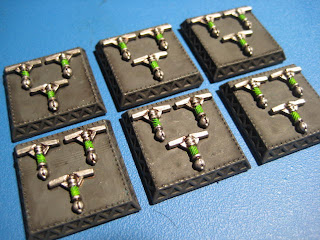 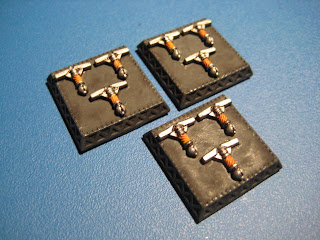 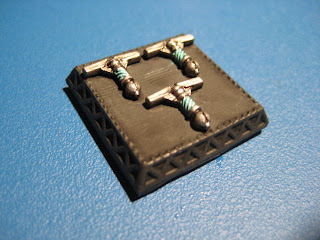 I was going to work longer on the bases of these tokens but then ultimately chose to keep them very simple and plain. At first I wanted to try to blend and stipple over the top of the bases several various shades of grey to hopefully mimic a cloudy, overcast sky. While I think that could have looked really cool, there's also a good chance I would have just made an awful mess. Therefore I wanted to make the bases seem as unobtrusive and neutral as possible. 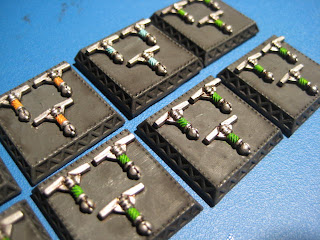 So moving right along I hope to finish painting the three squadrons of Diogenes Class Frigates either tonight or else early tomorrow. I may try to magnetize the turrets for the rest of my ships but I currently don't have enough magnets for anything other than the Pericles Class Fleet Carrier. I'm having a lot of fun working on my Covenant of Antarctica miniatures and overall feel good about the color scheme for this fleet. It could be premature but I am also starting to think about what I would like to collect as a second, rival fleet to go up against my South Pole scientists. It will be tough to choose as I like just about equally each of the four other major powers in Dystopian Wars. If anyone is particularly partial to one of them, I would love to hear the reasons why.

For now though I suppose I should just keep on painting. Goodnight!
Posted by Papa JJ at 11:44 PM