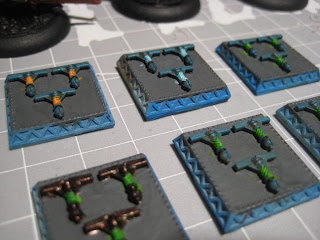 I've hit a couple of snags tonight while working on the Tiny Flyer tokens for my CoA fleet. Due to an early mistake I had to change my plans for these little buggers and I'm not as thrilled with the revised color scheme. Nonetheless I will continue on with it and perhaps plan on picking up a 30-pack of flyer tokens once they're released which I can paint as I had originally envisioned. Initially I had wanted to the flyers to be based on the same blue scheme as the rest of the fleet but have instead opted to paint them in a mostly metallic set of colors.

The Tiny Flyers deployed by the Covenant of Antarctica are quite different from those of the other major powers in Dystopian Wars as they are in fact remotely operated drones. They thus have several notable differences in how they function in the game. Further the CoA cannot make use of any Torpedo Bombers so that all of their drones are classified as either Fighter Planes, Recon Planes, and Dive Bombers. I am using the color of the central coil as a means to distinguish each of these types of tokens. 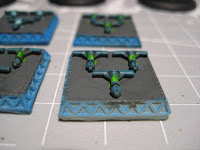 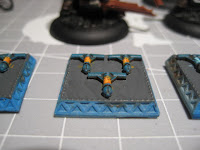 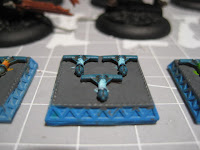 The ten Tiny Flyer tokens that I get to include for free with my fleet I have chosen to organize into the following squadrons: two squadrons of three Fighter Planes each, one squadron of three Dive Bombers, and lastly a single Recon Plane that is its own squadron. I primarily chose that arrangement of flyers however so that I would have at least one example of each type of token to paint. 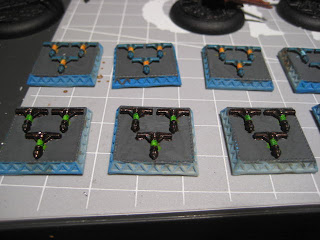 I'm a little anxious about how this batch of flyer tokens will turn out but fortunately they don't represent too large of an investment in either time or money, especially as I would have wanted to buy a pack of flyer tokens anyway just to get their stat card. I do still hope that I can salvage these ones as I could then use the differently painted tokens as a way of further distinguishing my squadrons. Plus I have a feeling I'll like the revised color scheme more once I am further along with the tokens. That in turn is good motivation for me to return to painting them right away. Goodnight!
Posted by Papa JJ at 11:58 PM