I went to the LGS today to pick up a copy of the new Ogre Kingdoms book, but while there I decided it was also time to buy my first bit of Citadel Finecast, a Warhammer Cockatrice from this summer's Storm of Magic wave of product releases. After hearing so many stories of disappointment from gamers about their own Finecast purchases, I had not been in a rush to buy any myself. The Cockatrice however looked cool to me and seemed like it should be fun to paint, plus I have some homebrew ideas in mind inspired by Storm of Magic for which this model would come in handy. Still though I was rather anxious about buying the Cockatrice since it comes in a fully enclosed box, thus concealing the condition of the miniature and any potential defects it might have. 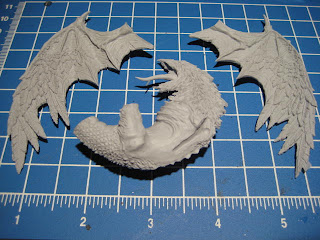 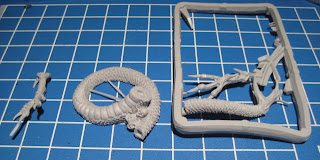 I was therefore initially quite relieved once I had opened the box as there was no obvious damage that I could see right away. Everything looked pretty good but then as I worked on the pieces more and more the little imperfections became noticeable. Most troublesome of these was the fit of the wings to the body which required a fair amount of trimming and even now feels like a fragile and insecure bond. Despite all the hype about how easy Finecast is to assemble, I think pinning the wings onto the body might have been an appropriate precaution.

Along with a somewhat wonky fit for the wings, the other problems were of the sort that most folks have probably come to expect from Finecast. There are a few areas that have been affected by air bubbles, mainly on the sides of the tail where many of the tips of the scales are damaged in such a way. I also found some voids on the monster's back and the little spines at the base of his tail all look instead like dripping pipes. The final problem I found was that the tip of the biggest claw on the Cockatrice's tail had broken off while still attached to the sprue. I may try to fix that by cutting down to the right size the end of Tyranid Scything Talon, but I probably wouldn't mind just leaving it the way it is now.
Despite these flaws overall I am more impressed with my first Finecast miniature than I had thought I would be, though this might have something to do with my expectations being so low. Even with the wings not fitting quite right it still seemed like it was an easy model to assemble. Requiring only minimal clean up and other preparatory work, building the Cockatrice did not take very much time at all to do which was really nice. The other thing that surprises me is that I am ultimately not bothered by the relative light weight of the model, having believed it would feel overly fragile and delicate. Perhaps most importantly, the level of detail on the miniature looks quite good and especially so on the wings and mane. 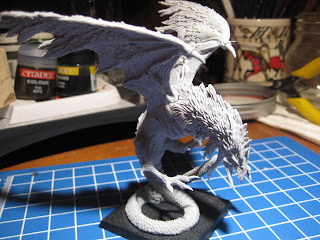 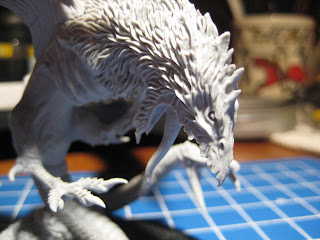 Therefore as my first experience with a Citadel Finecast miniature, I think the Cockatrice is, while not without its share of flaws, nonetheless a good addition to my collection and I am in general happy with my purchase. Had the marketing people at GW not completely oversold the virtues of Finecast upon its introduction, I would likely be more accepting of those casting mistakes that I did find on my mini. As it stands I find them mildly irritating but otherwise I am relieved that there was nothing worse, and certainly nothing so bad as to make me consider returning my toy monster. Hooray for low expectations! ;)
Happy painting and gaming!
Posted by Papa JJ at 11:51 PM