Lord of the Feast WIP 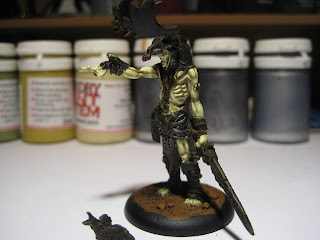 Okay, so I said before that it was time to work on some units for my Circle Orboros army, but here I am posting about another one-off sculpture, the Lord of the Feast solo. I took Monday off from painting and instead opened up a blister of Tharn Bloodtrackers to see what would be involved in assembling them. I decided that I wasn't quite ready to begin on them and would rather do the Lord of the Feast first. I wasn't sure how I wanted to divide up the Bloodtrackers and realized that if I had the solo done, I could next paint the first six of the Tharn to give me a 25 point usable army. After that I can finish off the unit before moving on to the unit of Druids, thus bringing up the points total to my current goal of 35, which I believe to be a relatively standard size for most games.
As for the Lord of the Feast himself, I initially struggled to find the right skin tone to use on him. I want to convey a sense of unwholesomeness and a sort of general ickiness that I get from the miniature and his fluff. Although I like the soft grey colors that I've seen him done in before, I'm nonetheless happy with the progression of colors that I ended up using. For a skin tone, I think it looks pretty gruesome, although I won't know for sure if this was the right way to go until I can see how it looks with some other areas painted up. Getting this guy assembled was fairly tricky and challenged me enough for the day so I don't feel like pressing to get much more painting done on him tonight. I'm also not sure how I want to paint all those different areas of animal skins so I think I'll leave him alone for now. As can be seen in the WIP photo, I've already managed to break the raven off of his arm within the first few minutes of painting. I'm worried that this forebodes some durability issues but hopefully he won't prove to be quite as delicate as I now fear. Oh well, time will tell. I really like this miniature and just hope it all turns out okay.
Color Guide - Lord of the Feast
Basecoat: Chaos Black, Bestial Brown drybrush
Skin: 30A, Ogryn Flesh, 30A, 30B, 30C
Chainmail: 35A, 35B, 35C, Badab Black
Eyes: 4C, Gryphonne Sepia
Stockings: 11A, 11B, 11C, Devlan Mud
Leggings and Straps: 45A, 45B, 45C, Devlan Mud
Skirt and Hood: 12A, 12B, 12C, Devlan Mud
Satchel: 7A, 7B, 7C, Devlan Mud
Belt: 13A, 13B, 13C, Devlan Mud
Severed Arm: 5A, 5B, 5C, Ogryn Flesh, cuts done with Baal Red
Bracelets, etc.: 36A, 36B, 36C, Devlan Mud
Pendants: 32A, 32B, 32C, Badab Black
Skulls: Bestial Brown, Devlan Mud, 9A, 9B, 9C
Trophy Skulls: same as above and finished with Devlan Mud
Antlers: Bestial Brown, Devlan Mud, 9A, 9B, 9C, Devlan Mud
Sword Blade: 35A, 35B, 35C, Badab Black, Ogryn Flesh
Sword Grip: Bestial Brown, Devlan Mud, 9A, 9B, 9C, Ogryn Flesh
Mane: Scorched Brown, Dark Flesh, Red Gore drybrush, Ogryn Flesh
Trophy Hair: 34A, 34B, 34C, Badab Black
Raven: 34A, 39A, 39B, 39C, Badab Black twice
Base: watered Bestial Brown, Devlan Mud, Graveyard Earth drybrush, Kommando Khaki drybrush
Stones: 57A, 57B, 57C
Base Lip: 34A
Posted by Papa JJ at 11:17 PM