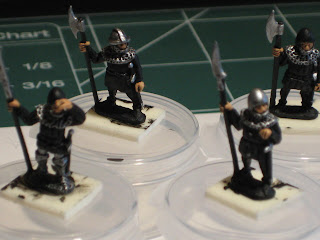 Painting is well underway with the English billmen as seen in the above photo. I overlooked the back half of two hilts but otherwise all the metal areas are done. This evening I spent time going back over the non-metal parts with black to clean things up for tomorrow's painting. Even though it can be a bit tedious, I feel that taking this extra step is really helping me achieve a much more defined look and crisper colors.

Yesterday my packs of Old Glory 15s arrived and it's been fun examining them. I've got to say that I am pretty darn impressed with them. I still think Corvus Belli and Xyston make better looking miniatures, but the Old Glory ones are certainly nothing at which to sneer. Most impressive so far is the variety of figures in each pack. Of the Andalusian Arabs that I ordered I've so far opened the Command and Arab Spearmen packs. The command bag has four different leaders and four different standard bearers, each consisting of two mounted figures and two on foot. There's even greater variety in the pack of spearmen which has nine different sculptures!

I'm confident that the Old Glory 15s are definitely good enough to justify purchasing an opposing set of Carolingian Franks which I am now planning out. Even though it's sort of impractical to assemble DBA armies with Old Glory packs, since you are likely to end up with a bunch of extra figures, it seems to me that they would be an excellent choice for other games like Big Battle DBA and FoG. Big Battle DBA for the Dark Ages sounds like it could be quite fun, not to mention a good use for my sixteen leftover Andalusian Arab Spearmen. But when I think about having to paint eighteen stands of Frankish knights, a total of fifty four men and the same number of horses as well, I still feel that normal sized DBA armies would keep me happy and content for this time period.
Posted by Papa JJ at 9:16 PM