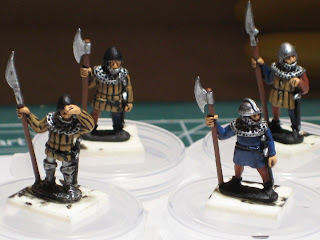 I wasn't sure how much time I would have to paint tonight so I decided to focus on the cloth areas of the billmen. I thought it would be more fun to do something colorful rather than trying to paint thin black lines and muttering to myself in frustration. I ended up painting for thirty or forty minutes and am probably more than half done with them. I'm still trying to decide if I want to give cloth coverings to the two guys with the black helmets or if I should just make them metal colored. I'd go with metal if it weren't for the fact that I already painted some of the Gascon Brigans (1x3Sp) with covered helmets. It seems like it might look weird or out of place if that was the only base with brightly colored heads but I'm not yet entirely settled on it.

I've already simplified their color scheme as I had initially planned on painting the cloth areas in a more elaborate halved or quartered pattern. Instead I decided to just use solid colors but to at least vary them from section to section. For example, one guy now has one red stocking and one blue stocking rather than each stocking have both red and blue. Most likely I'll wait on making up my mind until the last possible moment so that I can get a better sense of how they'd look with or without the colorful hats. Right now though I feel like it would be a mistake to pass on colorful hats no matter the situation!
Posted by Papa JJ at 10:44 PM