The baby was very cooperative and took a nice long nap in the middle of the day, but instead of painting I went swimming again. Now I've got a nice pink burn and I've got that dazed, tired feeling you get from being in the sun. However I did squeeze in some painting this morning and a few extra minutes this evening. Not quite there but oh well. I still need to finish the belts and add one more highlight to the metal areas. After that I'll tidy things up and then be done. I might use a wash on the metals but I don't recall if I had been doing that on the earlier pieces, but I'll deal with that tomorrow.

In the photo below you can see an example of a finished (i.e., fully painted and based) element for the 15mm Hundred Years War - English army, the single unit of spearmen included in the army's list. I'm not sure exactly when I painted it but I believe it was around last October. A few days ago I decided I had to fix that stripe running down the guy on the right's helmet, but otherwise I haven't done anything else to them since I took this picture. I'm a lot happier with the corrected paint job as the stripe was supposed to just help delineate the separation of colors, but instead it seemed to me to assert itself and became a focal point. I'll take new photos of all the finished elements and I think the improvement should be pretty obvious. 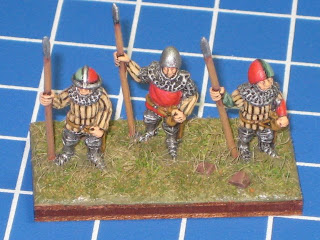 I'm really pleased with how well the bases have turned out so far. In particular I'm happy that it looks like their standing on the ground instead of each of them perched on their own little boulder. I've tried a lot of different ways to disguise the metal base that 15mm figures come on and this is the first one that has actually worked. Personally I think these guys look pretty sweet, but of course I am biased.

That's it, I'm tired and my body hurts. I'm going to sleep.