The other day I noticed some pictures of a fantastically Chaosified jump-pack Chaplin which Rich had posted over at his blog, Ineptus Mechanicus. He's been working steadily on a Word Bearers army for close to a year that makes heavy use of converted and kitbashed models. It's been a really cool project to watch develop because of the creativity, thought, and planning that Rich has put into each model, his corrupted Chaplin being no exception.

Along with admiring his conversion work on the Chaplin, seeing Rich's use of those Possessed wings reminded me of a model that I had kitbashed for a Black Legion army, another project that's been sitting on the back-burner for quite a long time. There's not much to my Chaos Lord, just a simple mix of pieces from various Chaos Marine and Space Marine kits and the tiniest amount of cutting. There are bits from the Chaos Space Marines, Possessed Marines, and Terminator Lord kits, and from the Dark Angels and Space Wolves frames as well. All that's left that I want to add to this model would be some Chaos-style gauntlets made out of greenstuff to his wrists in order to better disguise the loyalist origins of his arms. 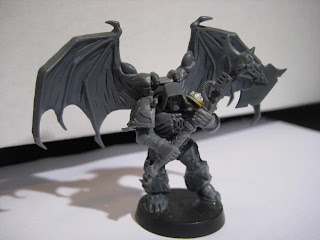 Ripper Murdark, scourge of the Groening Sector and diabolical leader of the Black Legion warband, The Cancelled Souls. Having established his base of operations in the tumultuous region of space known as the North Haverbrook Anomaly, Ripper Murdark has since waged a ceaseless campaign of terror and sabotage against the valuable Agri worlds for which the Sector is famous. This aggression reached its peak with his attempt to overthrow Imperial control of the planet Fonsager, fostering a protracted and violent rebellion which was bloodily quelled by the Stonecutters chapter of Space Marines. Having escaped the planet with his Black Legion warband largely intact, Lord Murdark has sworn to take revenge against the Stonecutters and to personally kill the flamboyant leader of its Second Company, Captain Homer, whom he blames for his defeat.
Chaos Space Marines Chaos Lord - Mark of Tzeentch, Daemon Weapon, Melta Bombs, Personal Icon, Jump Pack. 175 points.

That's the basic idea at least. To go along with the Stonecutters and the Blisstonian 9th that I've been gradually working on, I thought it would be fun to include some bad guys to further populate the Groening Sector. Since updating my progress on Captain Homer last night, this seemed like a good time to introduce his nemesis, Ripper Murdark. The Cancelled Souls are obviously in a very preliminary state right now but I've nonetheless enjoyed having an outlet for the occasional Chaos fix. I don't know what I eventually envision for this Black Legion army. At this point I do not have any grand ambitions for them beyond a rather small but still playable collection.

Okay, that's it for this now. I'm going to work more on those Slaanesh Chaos Daemons this week and I will try to post an update about them soon. Happy painting and gaming!
Posted by Papa JJ at 11:47 PM