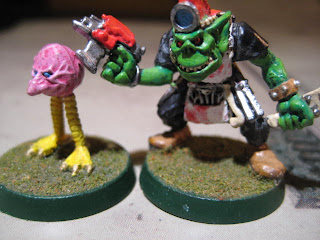 While searching for some missing paintbrushes earlier I came across one of my favorite old GW minis from back in the day. It's been something of a bust on the hobby and painting front today so for now I'd just like to share a few photographs of that old miniature, a rather archaic Ork Painboy. I'm not exactly sure when he was in production but I'd guess it was around twenty or so years ago. Likewise I don't know how old I was when I painted this one but evidently I was still rather new to techniques such as highlighting and even thinning one's paints. Thus he is a prime candidate for another edition of Flashbacks and Nightmares, in which I take a nostalgic look at examples of my painting past, both for a sense of perspective but perhaps more importantly for some simple facepalm-inducing fun.

So this Ork Painboy has for some reason always seemed really cool to me in that goofy old school Ork sort of way. I also remember well how much fun I had painting him and displayed him proudly for many years on my bookshelf. Even considering the more simplistic style of sculpting back then compared to what we have become accustomed, I think this model still has a lot of neat little details to enjoy. Looking at his gruesome range of doctoring implements, it's easy to see why this caste of Orks became known as Painboyz. The bone saw is great, as are his many knives, cleavers, and clamps. My favorite part of the miniature however is the doctor's head mirror that he wears. It has always amused me that an Ork doctor would be concerned about something as trivial as proper lighting. 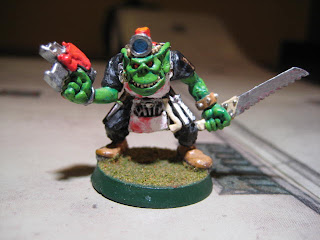 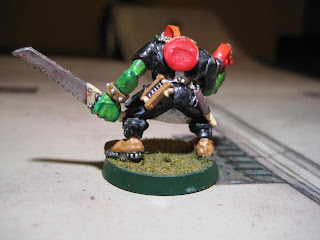 As was the case with many Ork personality blister packs, also included with the Painboy was a randomly selected squigly beast. Over the years squigs have become essentially standardized in their shape and appearance, but in olden times there was a very wide assortment of squigs which took on many different forms. Some were pretty nasty looking and may have even seemed like the dangerous little monsters that they were supposed to be. Others, however, appeared rather less ferocious.... 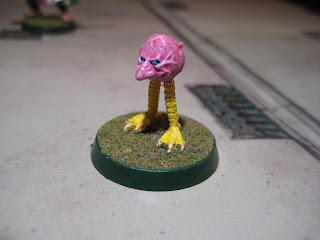 Now that's just weird. This particular squiggly beast could be one of the most bizarre and pointless miniatures Games Workshop has ever produced. It should be no wonder then that I am so fond of it. Due to it's standout nature, this squig has been a central focus for numerous homebrew scenarios and has served as an objective marker countless other times. Indeed it's possible that this horribly ridiculous squig has been used in more of my games of 40k than perhaps any other miniature. Not quite up to the usual Grim Dark standard, is he? 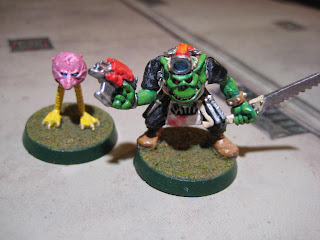 Hmm... it seems that I've run out of steam this evening and need to wrap this up. It's been a long day and I'm beat, although I've really enjoyed looking back on this classic GW Ork miniature and his less-than-classic companion squig. I find it quite interesting to see how things have developed and changed over the years. If there are any old minis that you remember fondly for whatever reason, please feel free to leave a comment telling me which ones were your favorites. Otherwise I hope everyone had a great weekend filled with plenty of gaming glory.