The Return to Naggaroth 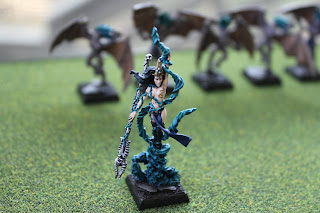 Since my return to blogging and hobbying, so far this month I've focused almost entirely on new projects, and in most cases these have been for new games as well. I did post once or twice almost a year ago about assembling some Skorne models but otherwise this has been all new ground for diceRolla. It was therefore a surprisingly pleasant return to the familiar for me when I unpacked my Dark Elves earlier this evening. They've been stuffed away basically since finishing the tournament at Adepticon so it was nice to take them out of their foam and let them breath the fresh air.

After working so intently on the Dark Elves for much of the start of the year, post-convention I was initially relieved to set them aside and tinker with other interesting miniatures while I prepared to move to North Carolina. Having gone through my hobby hiatus and then having right away started a bunch of new army projects, now that I'm at last getting back to my Dark Elves it seems like I've bridged the gap between my hobby activities from before and then after the move. I feel refreshed and am excited to return to painting my treacherous Druchii friends.

When I left off working on these Dark Elves I had been scrambling to provide everything in my 1000 point army with at least a first coating of paints. It was a close call but with DrGabe's help I made it just under the wire, even receiving a higher painting score than I had expected. A few of the units are somewhat further along but the majority of them have received only that initial round of color. As the general of the army I spent some extra time working on the Sorceress so I suspect finishing her could be done rather quickly. That's likely where I'll start up again, although painting the War Hydra is very tempting to me. 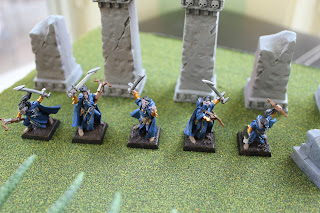 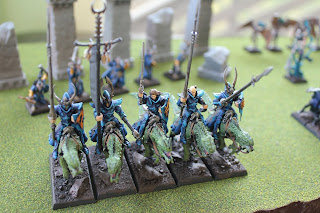 The Cold One Knights pictured above were DrGabe's contribution to my late night paint-a-thon leading up to the tournament. It's impressive what he was able to achieve with just four hours to paint and a little Jack Daniels to keep him motivated. :) 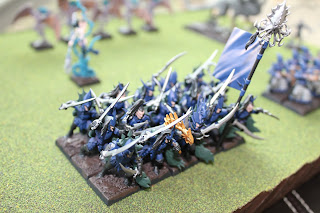 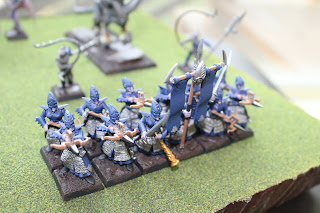 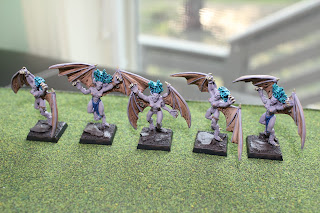 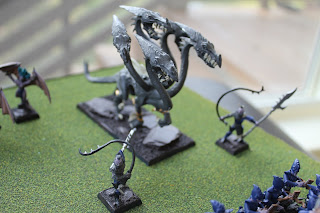 While I finish painting the first 1000 points of my army, I will also plan how I want to expand the army beyond what I already have. Although it was only four games, the tournament I participated in nonetheless was still helpful in giving me a better sense of how my army functions and where it needs to be strengthened. First off I plan on increasing the size of the Black Ark Corsairs unit by the remaining five models that I own, though I can easily envision taking it up to a size of 25 or 30 Corsairs. I also want to add a second unit of Repeater Crossbowmen as the first unit performed well when tested in battle. They were admirably reliable killers. 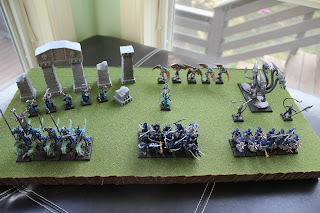 Another core choice of troops that would be very helpful I think would be just a basic unit of Dark Elf Warriors. They would act as a dedicated bodyguard unit for the Sorceress and likely not be meant for use as one of the primary combat units of the army. In my tournament games I kept the Sorceress deployed with the Corsairs thinking this would help keep her safe from sniping. Instead as the Corsairs were my main combat unit this put her far too much into harm's way and, thanks to a couple of brutal miscasts, proved on occasion disastrous for the Corsairs as well. Therefore having the Sorceress safely tucked into a unit of cheap Warriors, from whence she can cast her spells with reckless abandon, seems like a good way to go. Hmm... a Master to carry the army's Battle Standard should also be another early addition.

So while I consider all these options and decide what to add to the army next, in the meantime it just feels really good to be talking Dark Elves again. I think it was helpful for me to take a little break from the Druchii after Adepticon to avoid burning out, but I am now definitely happy to be returning to them. Having reviewed the army and where I left the project, I am ready to get back to it right away.

Happy painting and gaming!
Posted by Papa JJ at 11:55 PM