Requiem for a Termagant

First I have some sad news to report about the passing of a humble Termagant, a steadfast warrior and servant of Hive Fleet Hydra. Yesterday when I was putting away my newly found Tyranids, I must have overlooked this unfortunate 'Nid and left him out in a vulnerable position away from his brood. Somehow the errant model made its way downstairs (I suspect a kitten may have been involved in this stage of the unfolding tragedy), to then be set upon by my awesome xenos-purging dog, Charlie Brown. The results were not pretty. 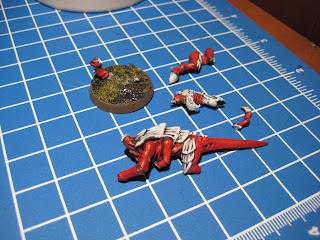 Upon discovering the dismembered remains of the Termagant this morning, I initially thought that perhaps I could fix him alongside the few other 'Nids that still need repairs. Looking closer though at the damage, I realized that an elbow, a leg, and his entire head were all missing and had been presumably consumed. Thus there will be no more battles for this valiant but woefully outmatched fighter.

On a happier note, after spending some time with the Codex today I realized that my Tyranids army can potentially field several hundred more points than I had remembered. Instead of the approximately 1500 points of models as I suggested in my previous post, I was very pleased to find out that by loading up on the optional biomorphs my 'Nids can even climb past the 2000 point mark. Although I would prefer to field more models and not have to rely quite so much on the biomorphs to bring up the points total, it is nonetheless an exciting discovery. Hooray!

* This brood of Raveners is the only unit in the army that does not comply with the WYSIWYG standard as it contains two models armed with Rending Claws and two with Scything Talons. I doubt this would ever present a problem as I cannot imagine playing this army outside of a very friendly and relaxed environment. I still think that it's something worth pointing out.

So with this list as a jumping off point it should be really easy for me to expand the army using the remaining models I own but have not yet assembled or painted. I mentioned yesterday that I already have a set of three Hive Guard and a Trygon waiting to join the swarm, and I also remembered today there is a pair of Tyrant Guard hiding somewhere amongst my boxes of minis. Once they're ready for the tabletop, just those six models alone will add close to another 500 points to the maximum size of my Tyranids swarm. I very rarely play games above 2000 points but it certainly would be nice to have the option, not to mention having a wider range of choices in lower point-level games.

Therefore even though this day started out with the grim discovery of my Termagant's demise, overall it feels like it has been a very positive day for my Tyranids. In fact the last two days have really renewed my excitement and interest in this army. I do not anticipate ever trying to fully update my Tyranids so as to include some of the more popular new units like the Swarmlord, Tervigons, or Tyrannofexes. However I am now at least willing to put some more time into working on the models that I have in order to get as much out of my collection of 'Nids as I can.

Well that seems like a decent enough plan I suppose to get me going again with these bugs. I look forward to the next chance I get to play a game using my Tyranids... should be fun times. I've never had much success with this army before but I have always enjoyed the experience leading the swarm. I like fast, aggressive armies and this one suites me quite well in that regard.

Okay, that's it for tonight. I hope everyone has a great weekend ahead... happy painting and gaming!
Posted by Papa JJ at 11:51 PM